Juan Manuel Correa has voiced his concerns about the Radillion corner at Spa-Francorchamps, following a serious accident during the weekend's Spa 24 Hour endurance race. 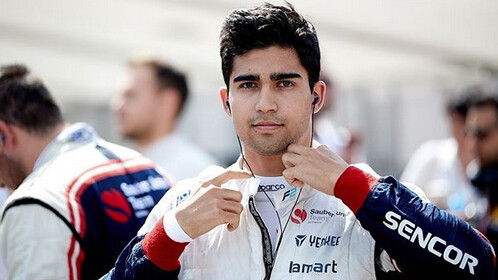 Formula 3 racing driver Juan Manuel Correa has issued a statement about the weekend crash at the Spa 24 Hours, in which a high-speed multi-car crash resulted in Williams reserve driver Jack Aitken suffering a broken collarbone and other relatively minor injuries.

Driving a Lamborghini Huracan for Emil Frey Racing, Aitken was caught up in the crash in the first hour of the GT3 endurance race, with images of the crash frighteningly similar to those of the fatal accident that claimed the life of Anthoine Hubert in a Formula 2 accident at the same corner in 2019.

"During the past few days I have received numerous requests for comments regarding Jack Aitken’s crash at the Spa 24 hours race on July 31, 2021," said a statement from Correa, whose car struck Hubert's at the Radillion corner at the top of Eau Rouge.

Correa suffered traumatic leg injuries from which he continues to recover. The American driver has managed to return to motorsport only in recent months, landing a drive with ART in Formula 3.

"First, and most importantly, I want to say I am extremely happy that Jack, as well as the other drivers involved in the accident are recovering from their injuries.

"The accident occurred almost two years after my own accident at the same notorious Raidillon-Eau Rouge turn in the Spa-Francorchamps circuit, where I suffered serious injuries from which I am still recovering and the motorsport community tragically lost fellow driver Anthoine Hubert. The images of the crash are therefore particularly haunting."

Correa explained that he has voiced concerns about the Eau Rouge/Radillion sequence of corners, which has become a frighteningly fast and blind corner in recent years. Due to the layout constraints of the escape area, crash barriers tend to funnel cars back out close to, or onto, the racing line, leaving them open to secondary impacts. It was in this manner that Correa's car struck Hubert's.

"Since my accident, I have raised various concerns with the FIA and organisers about track and driver safety.

"I have offered to share information from my own experience. I have been seeking answers about what happened, why, and what steps the FIA and other stakeholders have taken to make safety improvements to avoid another driver from suffering serious injury in similar circumstances.

"At this time discussions are ongoing with relevant stakeholders to try and resolve my concerns. I am confident those discussions will reach a constructive conclusión and I will be in a better position to comment in the coming weeks."

Callum Ilott, who was one of Correa's teammates at Charouz in 2019 at the time of Hubert's accident, also has spoken out about the corner. Wishing Aitken a speedy recovery on social media, Ilott said: "I would also like to say that there needs to be a change at this corner and I’m very surprised nothing has changed yet. Enough is enough."

Aitken continues his recovery in hospital, and will return to the UK shortly to continue recuperation at home.