The Mercedes team boss was relieved that Valtteri Bottas managed to win in Istanbul, which helped Lewis Hamilton in the Drivers' Championship. 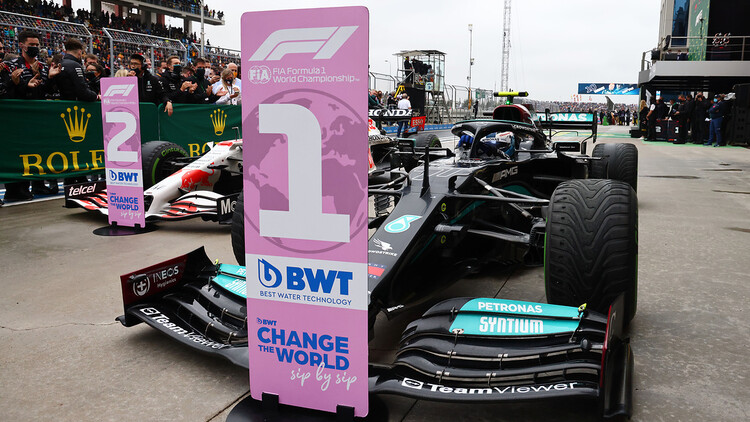 Mercedes Team Principal Toto Wolff appeared to be relieved after the Turkish Grand Prix when Valtteri Bottas took his first Formula 1 victory in 2021.

Bottas dominated the race in damp conditions, having starting from pole position, and never seemed to be under any threat from Max Verstappen or Charles Leclerc.

His win, and Lewis Hamilton's fifth place, meant Mercedes extended their advantage over Red Bull in the Constructors' Championship.

"I think in a normal dry race, finishing fifth [for Hamilton] would have been the best case," Wolff told RacingNews365.com and other select members of the press.

"On Sunday [in the wet] the best case with the hindsight of the end result, or with the information we have at the end, probably third would have been the best we could have achieved.

"It's a five-point swing. I think we need to walk away from here and say that was damage limitation for this weekend.

"As for Valtteri, thank God Valtteri was out there and won the race and scored an extra point for the fastest lap."

Bottas' win and fastest lap prevented Verstappen from gaining an extra eight points. Nevertheless, the Dutchman's second place has given him the lead of the championship by six points over Hamilton.

Six events remain this season, including two new venues in Qatar and Saudi Arabia, and Wolff isn't too worried about Hamilton's points loss in Istanbul.

"In the end, we lost eight points to Red Bull with a grid penalty," said Wolff. "Red Bull, last week, [in Sochi] were happy with a seven points loss. So it's going to be be very tight until the end.

"DNFs are going to make the big difference and that was also a consideration on Sunday, not three- or four- or five-point swings."