Wolff admits 'biting back' at Hamilton in past: I had to make a point

Toto Wolff is full of praise for Lewis Hamilton's maturity, but admits there were occasionally some difficult moments in their earlier days of working together. 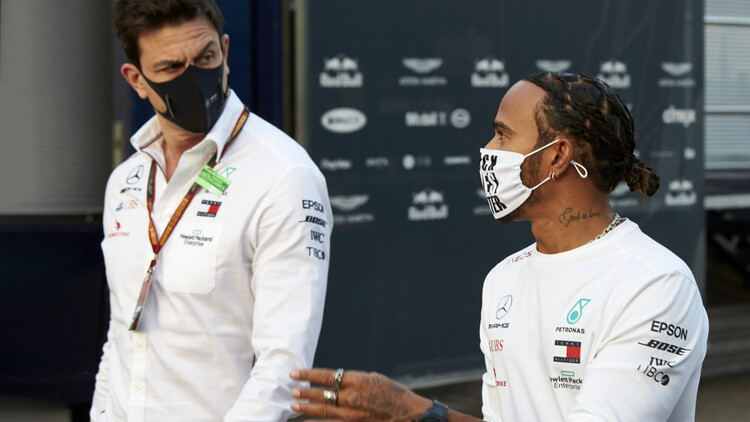 Mercedes team boss Toto Wolff has admitted that he wasn't afraid to "bite back" at Lewis Hamilton if he needed to make a point during their early days of working alongside each other.

Hamilton joined Mercedes in 2013, and Wolff then faced a difficult four years in terms of managing the strained relationship between the Briton and teammate Nico Rosberg.

Those days are well in the past, and Wolff is full of praise for the level of maturity displayed by Hamilton, who has won six of his seven World Championships with the Brackley-based squad.

However, there were times in those early years where Wolff made sure that his driver knew the importance of being respectful to the team.

"This is Mercedes. We have no place for the genius jerk," Wolff told the Daily Mail. "Even a superstar driver has to respect team values.

"But with Lewis, we've been eight years together now. He's not an arrogant, spoiled little kid. He's a mature racer who has won seven titles, six with us, so we can take those moments, it's part of our role to be a trash bin for the driver sometimes.

"In the car, you can get very frustrated and emotional. You are racing at 200mph, in the rain, you have no idea about the overall picture of the race and decisions are being made that you cannot understand.

"In the early years I would bite back at Lewis. He was very young and I had to make the point that I wouldn't allow the driver to bad-mouth the team. But we've been moved on from there a long time."

However, Wolff says that he would still take action today if he felt that a driver was not showing this kind of respect to the team.

"I wouldn't hesitate in the future if a driver talked bad about the team or wasn't appropriate," Wolff explained.

"I would first deal with it internally and if that didn't yield results I would take the driver out of the car. On the bench, yes.

"I don't think that would ever be Lewis. He's a team member, not a contractor, a driver that comes and goes. We've been together since 2013. We know each other so well, there's so much trust and respect."