Why Hill is 'worried' ahead of the Saudi Arabian GP

Damon Hill has expressed concerns about the high-speed nature of the Jeddah Corniche Circuit. 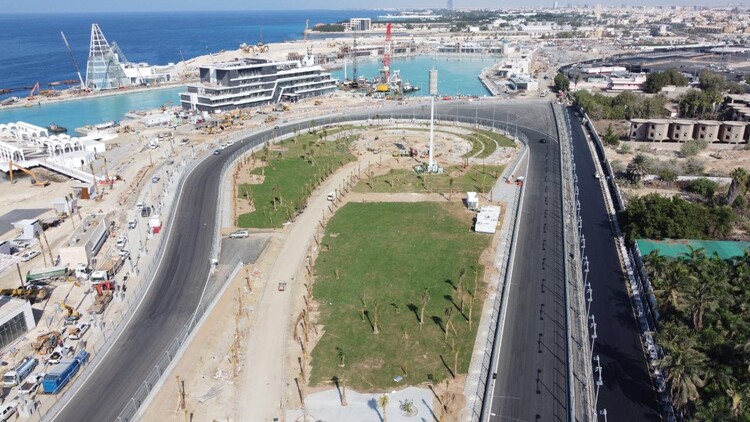 Damon Hill says he is "a bit worried" about the speeds predicted at the Jeddah Corniche Circuit, the all-new venue that will host the inaugural Saudi Arabian Grand Prix.

Situated along the coastline of the Red Sea, the 6.174km street track is set to boast an average speed of more than 250km/h, making it one of the fastest on this year's F1 calendar.

It also features 27 corners, the majority of which are high-speed sweeps lined with walls and barriers - drawing comparisons to Azerbaijan's Baku City Circuit.

"I'm a bit worried about the speed"

"The track we're going to discover, I think it's gonna be a big challenge, by the looks of things," Hill told the F1 Nation podcast.

"I'm a bit worried about the speed. I mean, there's not much run-off. They've got the SAFER barrier that they're using, which is like they do in Indianapolis, but it's gonna be very high speed and not much run-off.

"So [it's] high-risk, high jeopardy. That always gets your attention as a racing driver."

Will it favour Mercedes or Red Bull?

As for whether the circuit will suit Mercedes or Red Bull, Hill was unwilling to pick one over the other, though stressed the importance of this weekend's Grand Prix in the battle for both championships.

"I think it's a very difficult one to judge, because it's such an unusual-looking track," said Hill.

"I compared it to possibly like Baku, and I was told off by [F1 Managing Director] Ross Brawn who said, 'No, no, it's not like that at all. It's a completely different type of track. It's got banked corners and stuff'.

"Some of the sweeps look quite long, so I'm racking my brains - I think it could be a cross between something like Singapore and Baku."

He added: "I think it's great that nobody knows where they're going. This is a completely unknown place, an unknown track.