Mercedes have explained why they opted against trying to undercut Sergio Perez when Lewis Hamilton came up behind the Mexican driver with 20 laps to go in the Turkish Grand Prix. 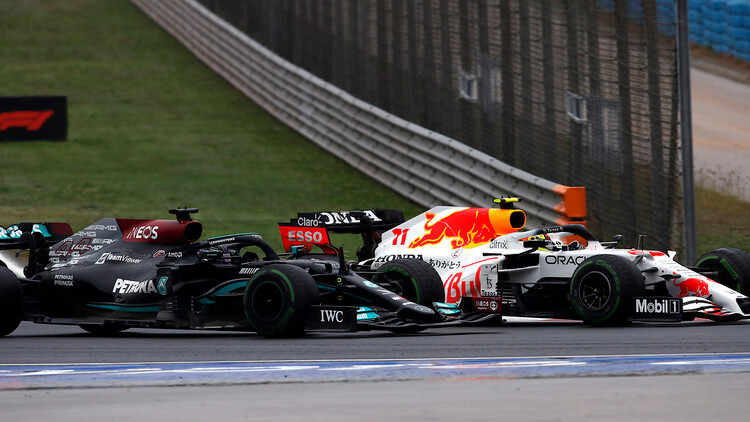 Mercedes were slightly caught out by Red Bull calling Sergio Perez into the pits just as the Mexican had started battling with Lewis Hamilton in the Turkish Grand Prix.

With Perez managing his tyres, Hamilton caught the back of the Red Bull and attacked into the final sector of the lap. This resulted in a tremendous wheel-to-wheel scrap as the pair drag raced down the pit straight, with Perez keeping his nose in to hold onto the position.

Shortly after the scrap, Perez dived into the pits for fresh Intermediates and this forced Mercedes into staying out in a bid to pull away as the Red Bull adjusted to the new tyres.

Ultimately, Hamilton staying out too long on his tyres resulted in him finishing well behind Perez, as well as Ferrari's Charles Leclerc.

Speaking in the team's debrief after Turkey, Chief Technical Officer James Allison explained that Mercedes did think about undercutting Perez as they caught him, rather than trying to get past on track.

"Sitting as we were behind Perez, approaching that Lap 36, 37 mark, with a car that was quicker than Perez, but penned in by it, you've got to consider the things that were running through our minds at the time, and principally running through James Vowles' mind, our Chief Strategist," said Allison.

"Yes, it is possible we might have made an undercut, but you have to remember that when you come out on fresh Intermediate tyres on a track that is no longer covered in water, and is actually nearer to dry than it was to wet, then those tyres have to be treated with kid gloves in the opening laps, else they tear themselves to pieces and suffer from what we call heavy graining.

"So instead of what you can normally do, which is come straight out on new rubber, hit it and get a jump on someone, we would have to come out and then be super careful on that new rubber. So [it's] pretty tough to undercut in those circumstances.

"Set against that two other things. Firstly, if we waited and maybe Perez came in, we would then take track position over Perez without having to overtake him. And if we could hang on to our tyres then that would have been the easiest overtake in the world. That's sitting there in your mind as well."

Allison explained that one of the main factors for Mercedes' thought process was the possibility of swapping straight to the slick tyres if a driver could get far enough into the race. This was also considered by Aston Martin, who brought Sebastian Vettel in for Medium tyres on Lap 37 – ultimately the wrong decision.

"It was a drying track, perhaps it was going to go fully dry and we would want to go onto slicks," Allison explained.

"The car that could get from Intermediates onto slicks in just one change, that would be a car that would do very, very well at the end of the race.

"While the opportunity of an undercut was hypothetically there, weighing up those other opportunities against it made us not want to take it, and in the end it probably would not have succeeded as an undercut, but maybe would have been a good thing to do with the benefit of hindsight, in terms of the right point in the race to put new rubber on.”