What Hamilton's contract means for Verstappen

Lewis Hamilton will be Max Verstappen's biggest rival once again in 2021 after the Brit extended his stay with Mercedes. While the announcement means the grid is set for the coming season, that doesn't mean that Max and Mercedes won't be linked together again in the future. 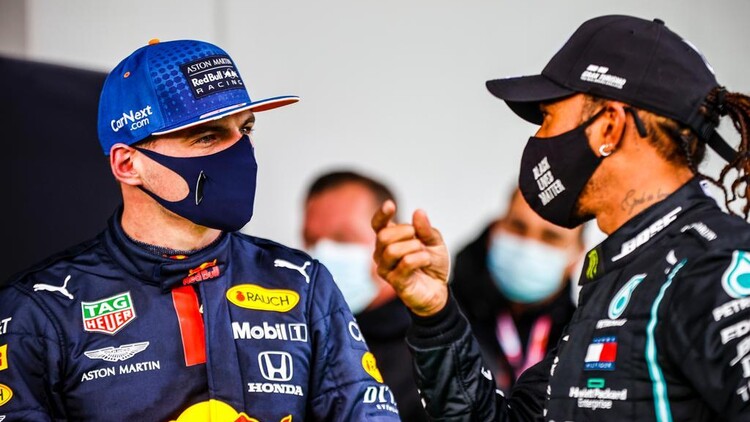 A new contract with Formula 1's top team and a chance to win a record breaking eighth world title. No doubt that sounds like great news for Lewis Hamilton, but maybe less so for his rival Max Verstappen, who will have to contend with the Brit on the grid in 2021.

However it isn't all bad for the Dutchman, who's contract with Red Bull runs until 2023. That deal means Max will have a seat at one of the top teams for at least three more seasons, while Hamilton's future past 2021 remains unclear. Whether the Brit leaves F1 at the end of the season or Mercedes go in a different direction, it seems like the German manufacturer have a replacement already lined up in George Russell.

However Verstappen has an exit clause in his contract that he can exercise should Red Bull fail to provide him with a competitive car and engine. Let's say Red Bull fail to meet their end of the bargain, Verstappen looks for a way out and Lewis leaves Mercedes...well you can figure out where we're going with this.

Thus there are two options. Along with Hamilton, Valtteri Bottas' contract with Mercedes expires at the end of the season, meaning both seats could potentially be open. Hypothetically, Mercedes could bring in both Russell and Verstappen and field an all new driver pairing in 2022. While George has shown he has what it takes to leave his mark at the front of the grid, Max is a proven race-winner with an impressive track record despite his young age.

The other option would be to position one of Verstappen or Russell alongside either Hamilton or Bottas. That would create a clear one-two driver combination, or generate fireworks like when Hamilton was partnered by Nico Rosberg and both men refused to give an inch to the other.

Verstappen may only be 23, but he's shown that he has everything that is needed to become a world champion.

At this time Mercedes hold all the cards, and their new agreement with Hamilton will quell rumours for the time being. However a one-year deal means speculation will pick up once again, meaning Verstappen and Mercedes are destined to be linked together once again sooner rather than later.