Wendlinger recounts career-ending Monaco crash: I had to admit I was too slow

Austrian racing driver Karl Wendlinger has recounted his crash at the 1994 Monaco Grand Prix, which left him in a coma and later ended his Formula 1 career. 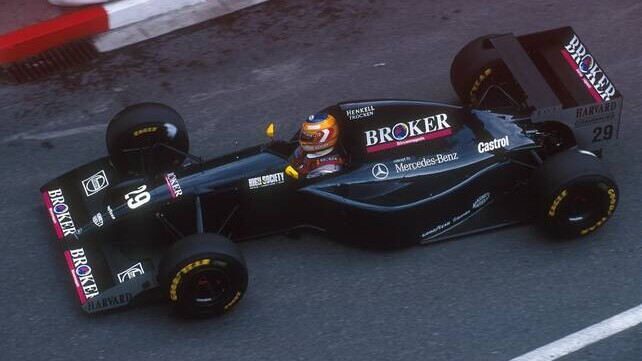 Karl Wendlinger has spoken about his crash at the 1994 Monaco Grand Prix, which left him with head injuries and in a coma for 19 days.

Wendlinger, driving for Sauber, headed to Monaco that year on the back of a fourth place finish at the tragic San Marino race. The 25 year old's career was just starting to take off, as his career followed a similar trajectory to that of German Mercedes sportscar teammates Michael Schumacher and Heinz-Harald Frentzen.

Braking for the chicane during the first practice session in Monte Carlo, Wendlinger lost control of his Sauber and slammed sideways into the barriers in an impact frighteningly similar to the one that sidelined Sergio Perez at the same race in 2011.

With the safety standards of 1994 not being as high as today, Wendlinger was knocked unconscious and was placed into an artifical coma to begin recovery. He explained that he simply doesn't remember any of the events of that weekend.

"The last memory of the Monaco weekend is that I went to bed on Wednesday night," Wendlinger explained to F1-Insider.com.

"My accident happened on Thursday. I can't remember it anymore. I hit the side of a container at a speed of 177 km/h and hit it with my head. 19 days later I was brought out of my artificial coma in Nice. I would have talked, I was told. But I can't remember that. Only one morning in Innsbruck hospital. Then I woke up and thought: “It looks like a hospital. How do i get here? And why does my knee hurt so damn much?” Then my mother explained to me what happened."

Wendlinger explained that, after his release, he quickly had to figure out whether he could still drive a car and get back into his Sauber seat, having been replaced by Andrea De Cesaris.

"After that, I immediately did everything I could to get back into the cockpit. The first private trip by car was like in slow motion. People behind me flashed and honked because I was holding up all the traffic. But at that point that was my limit. Shortly afterwards, I was doing laps on the Salzburgring in a Porsche Supercup car. At the end of the day, the times were so good that I was able to venture into Formula 1."

His first test was at Paul Ricard, and the first signs that something wasn't quite right quickly reared its head.

"I was two and a half seconds slower than my team-mate Heinz-Harald Frentzen," Wendlinger explained.

"But it was raining, so the tests were canceled. The next test in Barcelona 14 days later had to be canceled because I got a severe headache. It wasn't until the decisive test in December, when the question was whether I should get a cockpit for 1995, that I was back on track. There was still a headache, but Heinz-Harald was the benchmark. I think he wasn't driving at the limit, so I wasn't that far away from him. But above all, I was faster than the other applicants. That's why I was awarded the contract again."

Wendlinger would get the chance to take part in the first four races of 1995, but was replaced for the Monaco GP. One year after his crash, his F1 career was all but over, although he did get the chance to put in two more appearances with Sauber at the end of 1995.

Wendlinger explained that the injuries he sustained simply wouldn't release their hold on him, severe enough to prevent him from driving as well as he had before the accident.

"During the tests in Barcelona at the beginning of February, I just couldn't concentrate anymore," he admitted.

"Something must have happened in my head during the two winter months that I couldn't explain. The doctors told me I could lead a normal life, but the head injuries were probably too severe to withstand the stresses and strains of Formula One. I drove four races and realised that I was too slow. I then had to admit that to myself."