Turkish GP Preview: Will Mercedes bite the bullet and take a penalty?

It's all eyes on Mercedes as Formula 1 heads off to Turkey, with the threat of an engine penalty continuing to loom over Lewis Hamilton. 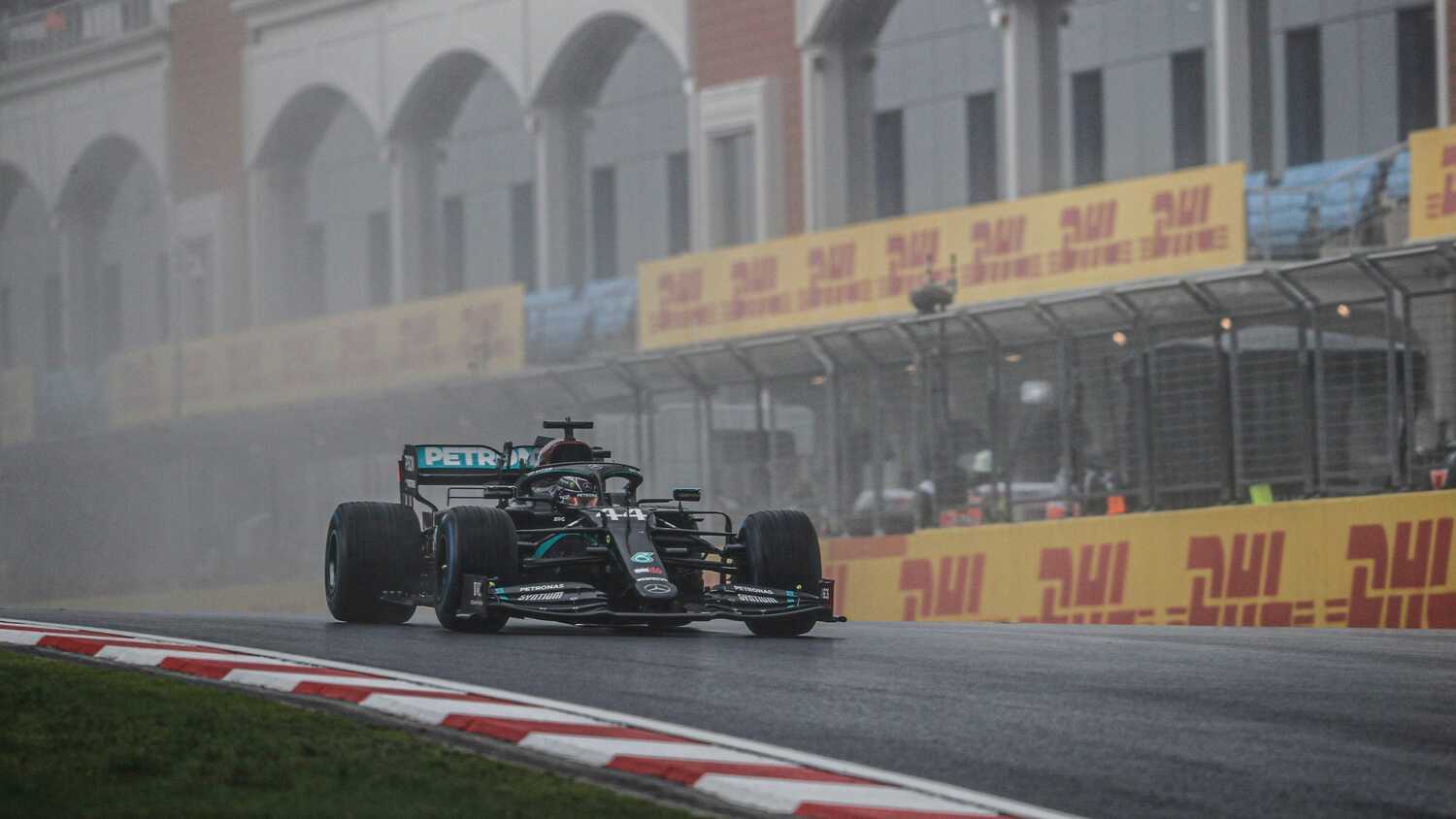 Formula 1 heads to Turkey for Round 16 of the 2021 World Championship, with a return to the popular Istanbul Park for the second consecutive season after a decade's absence.

An unlikely returnee to the calendar during last year's COVID-19 affected season, Turkey has secured another race this year as a replacement for the cancelled Japanese Grand Prix.

While unlikely to secure a long-term return, Istanbul Park continues to thrill drivers thanks to a decent mixture of corners and elevation change, a unique multi-apex challenge at Turn 8, and a very clear overtaking opportunity at the end of the back straight.

While the challenge of Turn 8 has been reduced thanks to the incredible levels of downforce of the current Formula 1 cars, Istanbul Park provided a huge test last year. The newly-resurfaced tarmac proved treacherously slippery in the dry and, just to add to the fun, persistent rain turned the track into something more akin to a rally stage.

It led to a topsy-turvy weekend, albeit with a usual name emerging as the winner, as Lewis Hamilton mastered the tricky conditions to claim his 94th career win.

This year, the track has undergone water blasting in a bid to improve the grip, while Pirelli are also bringing along softer compound tyres. Held a month earlier than last year, ambient temperatures are set to be higher so, in theory, this weekend should be less chaotic for the drivers. 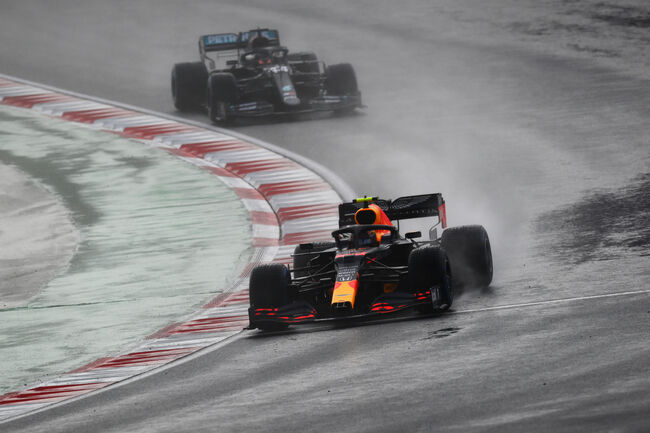 Will Mercedes take an engine penalty?

Even though Max Verstappen trails Hamilton by two points in the Drivers' Championship, there's a sense that the tide has turned slightly against Mercedes recently.

Red Bull and Verstappen were expected to lose ground to Mercedes and Hamilton at Monza and Sochi but, despite taking an engine grid penalty for the Russian GP, Verstappen minimised the damage completely. The importance of securing second place on a weekend where Red Bull managed to fit a fourth Honda power unit can't be underestimated, as it now means there is significant pressure on Mercedes to respond.

Given that Hamilton only has two reasonably high mileage power units in his pool with seven races remaining, a grid penalty looks a near certainty, especially given the issues that teammate Valtteri Bottas has suffered with his power units.

The question mark is when will Mercedes take the punishment of starting from the back? They're unlikely to do so at the final handful of races, and they need to do it at a track where overtaking is somewhat easy. This would suggest that either Turkey this weekend, or the United States next time out, are the most likely venues.

Mercedes haven't ruled out taking a penalty this weekend, but it will leave them with a mountain to climb against Red Bull if the race turns out to be held in normal, dry conditions. Recent races have shown that Mercedes have encountered struggles with overtaking against, in particular, McLaren, and their cars were never that efficient when running in traffic anyway.

The most likely scenario is that Mercedes will opt for a 'wait and see' approach, and perhaps take the penalty after qualifying on Saturday once they know where they are on the grid.

"It's a possibility," Wolff told Sky Sports News about the chances of a grid penalty, though he added: "When, and how, is not yet decided.

"Most important is that you don't DNF because of a reliability issue. You can cope with swings, whether you finish second, third, I think that is OK, the championship is going to go long. But if you don't finish..."

What would make Mercedes' decision a lot easier is if this weekend turns out to be wet and wild once again, as the added component of chaos, as well as the possibility of Safety Cars and a less than straightforward weekend for Verstappen, could negate a lot of the damage of a grid penalty.

As an aside, Red Bull will race with a unique livery this weekend. Celebrating Honda at what was supposed to be the Japanese Grand Prix, the RB16Bs will race with a one-off white livery to commemorate the Honda look from the 1960s.

The battle of the Number Twos

Assuming a normal weekend weather-wise, and if Mercedes opt against a penalty, it's safe to presume a Verstappen vs. Hamilton showdown at the front once again.

But the battle of the second drivers could be quite interesting, too. Sergio Perez and Bottas had markedly different races here last year. Perez, then driving for Racing Point, secured second place after a storming drive where victory even briefly looked on the cards. Bottas, by comparison, had one of his 'strange' weekends, unable to keep his Mercedes facing the right way in the tricky conditions and coming home in 14th place.

Bottas had a similarly nondescript weekend last time out in Russia, despite having his car fitted with a fresh engine and the added impetus of trying to keep Verstappen behind him in the early stages. But it wasn't a task he seemed to relish, offering little resistance against the Red Bull, and it'll be intriguing to see whether the Finn shows any particular desire to help his teammate clinch the title before leaving for Alfa Romeo in two months' time.

At Red Bull, there's no doubt that Perez is willing to help Verstappen, but the question of whether he's able to remains. It's been a dreadful middle third of the season for the Mexican and, having had such a strong race here last year, this is the venue at which he needs to step up and start delivering if he wants to help Red Bull claim the Constructors' Championship. 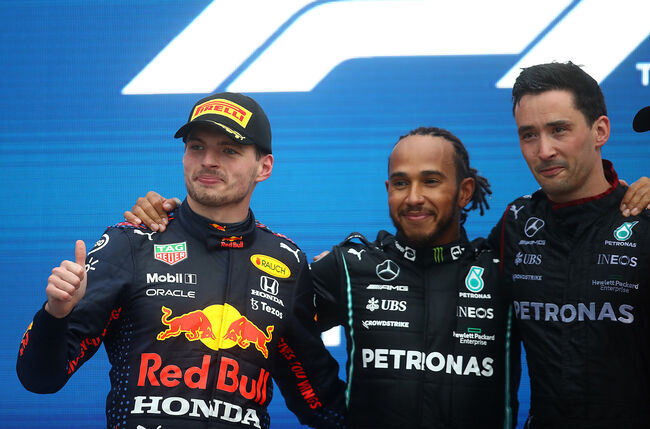 The added headache that is McLaren

Had the Russian Grand Prix not featured any rainfall in the last 10 minutes, McLaren would be heading to Turkey on the back of two straight victories after Lando Norris commandingly held the lead over Hamilton in the closing stages at Sochi.

It was the second race in a row where Hamilton had to stare at the back of a McLaren for extended periods, unable to use the grunt of the Mercedes engine to power past the exact same unit in the back of the MCL35M.

Form is extremely difficult to gauge at Istanbul Park, given that last year's race was the first in a decade, and held in far from straightforward conditions, but there's little reason to think that McLaren will slip back significantly from where they have been in recent races. While the track should play more to Red Bull's strengths than the likes of Monza and Sochi, McLaren could easily find themselves slotting in behind them if Mercedes do end up taking a penalty with Hamilton.

This would be an absolute nightmare scenario for Mercedes, and their pace could end up making Mercedes' decision for them if there's a possibility the Woking-based team are too fast to overcome.

But McLaren themselves may have to worry about Ferrari this weekend. Last year's dreadful SF1000 managed to look competitive in Istanbul, with the team securing third and fourth place. Can the SF21 match that?

One way to watch the Turkish Grand Prix in certain countries is through F1 TV, F1's own digital streaming platform that helps you get inside the pit lane while accessing real-time statistics and timing, along with historical content.