Many of the remaining dominos in the driver market are set to fall into place soon, as RacingNews365.com understands a deal has been signed to bring George Russell to Mercedes. 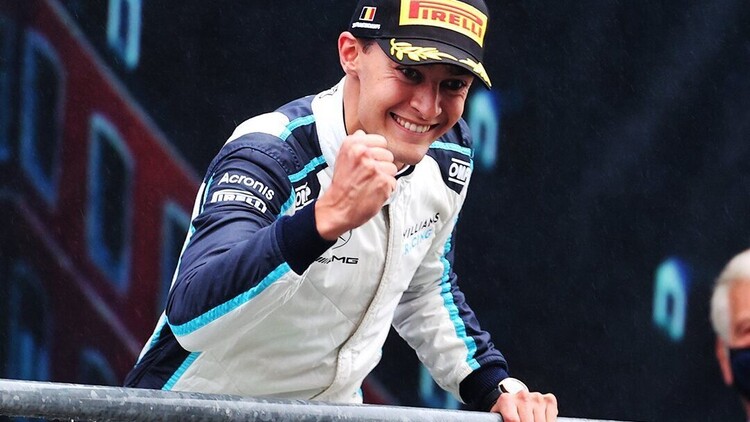 George Russell is set for a promotion to the Mercedes seat alongside Lewis Hamilton for 2022, RacingNews365.com understands.

Russell is understood to have been given the nod by Mercedes to step up from Williams, for whom the Briton has driven since entering the sport with Mercedes backing in 2019.

A decision on the second Mercedes seat had been expected to be made prior to the Belgian Grand Prix weekend, but no confirmation came from the Mercedes camp at Spa-Francorchamps, although team boss Toto Wolff hinted that the call had been made.

With Russell set to take the second seat, the incumbent Valtteri Bottas is understood to have reached an agreement with Alfa Romeo to replace the retiring Kimi Raikkonen. Bottas and Alfa Romeo team boss Frederic Vasseur go back more than a decade, with Bottas winning the Zandvoort Masters in 2009 and 2010 for Vasseur's ART team, as well as the GP3 Championship in 2011.

It's suggested that Raikkonen will announce his retirement from Formula 1 after 20 years at the upcoming Italian Grand Prix, with his enthusiasm for Formula 1 finally having waned during an uncompetitive year for Alfa Romeo.

RacingNews365.com has also learned that Antonio Giovinazzi is unlikely to hold onto his seat at Alfa Romeo, with the Italian driver being moved aside by Ferrari to join their Hypercar programme for the World Endurance Championship.

In his place, RacingNews365.com understands, will go Nyck De Vries, who is the newly crowned Formula E World Champion. While his status as a Mercedes works driver in Formula E might not make him an obvious choice for a Ferrari-affiliated team in Alfa Romeo, it's understood the deal has come about due to long-standing ties between Vasseur and Mercedes boss Wolff.

However, current Ferrari reserve and Academy member Callum Ilott is also a rumoured name linked with the second seat, although thought unlikely at this point, despite the young British driver taking part in several practice and test outings with the team over the past 18 months.

However, Theo Pourchaire also can't be ruled out as a prospect for Alfa Romeo. The French driver recently became eligible for a Super Licence on his 18th birthday, thanks to his stellar results through his Formula 4 and Formula 3 campaigns as well as his current sixth place standing in the Formula 2 Championship.

He recently tested a 2019 Alfa Romeo at the Hungaroring, with Vasseur acknowledging that he could be a prospect.

Russell's promotion to Mercedes will open up a seat at Williams, and RacingNews365.com understands that Alex Albon is set for a return to Formula 1 with a full-time drive, partnering the retained Nicholas Latifi.

Albon currently races in the DTM series with Red Bull backing, as well as serving as a reserve and simulator driver for both Red Bull and AlphaTauri.

Both Christian Horner and Dr. Helmut Marko have recently indicated a desire to help Albon find a way to continue in Formula 1, with Marko quoted by Kronen Zeitung as saying: "Alex is a talent. We didn't write him off after his time at Red Bull in Formula 1. He'll get his chance again in Formula 1 – wherever [that is]."