Russell picks out crucial moment he believes silenced his doubters

Mercedes' new signing, George Russell, has picked out the moment he feels forced his doubters to have a rethink. 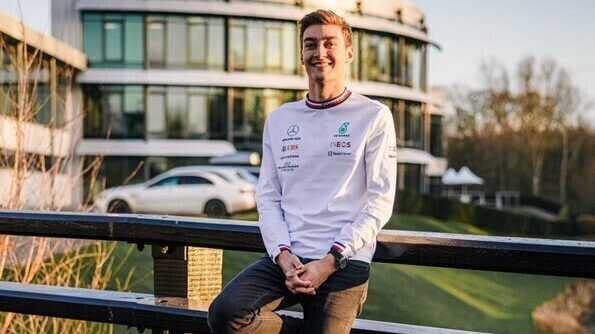 George Russell heads into the 2022 season with a completely different set of expectations after spending three years towards the back of the grid with the Williams team.

Having been promoted into a Mercedes race seat, Russell now has a very real opportunity of becoming a race winner this season and maybe even delivering a championship challenge if he and the team hit the ground running in F1's new era.

But having not had many opportunities to showcase his talent while mired near the back with a truculent Williams, Russell has picked out the moment over his three seasons where he believed that he silenced his doubters.

Unsurprisingly, it was his first weekend racing for Mercedes, when Russell stepped in as a substitute for Lewis Hamilton at the 2020 Sakhir Grand Prix as the World Champion was sidelined by COVID-19.

"I guess Bahrain, last year [2020] was the key moment that; if there were any doubters, the doubts were gone," Russell told the Motor Sport Magazine Podcast.

"The key people who would have made the difference in my career, Toto [Wolff, Mercedes boss], he ultimately is the one who has the final say.

"He believed in me, and he had faith in me, even when I was finishing last every single weekend. So for me, that race obviously potentially proved a point to so many others but, at the end of the day, it's Toto who makes the decision."

Russell put his car on the front row of the grid, and was a strong challenger for the race victory until a late puncture ruined his charge. But despite the outing in the W11, Russell believes it didn't change anything in Wolff's eyes.

"Because he followed my career so closely, I guess he believed he knew what I was capable of," he said.

"So that race probably didn't really change anything in his mind whatsoever but, to the outside world, so many others may have thought, 'OK, it is clear why he wants to go down that route'.

"But I guess for everybody that was a standout race and a pretty crazy one, when I look back at it."

"Williams spell was very good for my development"

Having signed a three-year deal with Williams, taking him through his first three seasons in the sport, Russell was asked whether he felt he could have ended up in the Mercedes more quickly had that contract not been in the way.

"It's ifs and buts, isn't it? They are conversations that didn't even really happen because we knew how watertight the contract was," he explained.

"The contracts... Mercedes created the contract and worked with Williams on my behalf, so they were aware that Williams had all of the power.

"There was no movement there whatsoever. Claire [Williams, former team boss] was pretty clear, she had a very good deal from her side, because she had all of the power.

"Williams was the last seat in Formula 1 – it was that or I wasn't in F1. So she could really tighten that contract down. But it was all in Williams' favour.

"Obviously, you want to have a bit of flexibility, because nobody knew how the team would perform. But we had faith at the time that the team would go back to some better results."

But having spent those three years fighting a tricky car while trying to score good results and carry the team forward, Russell believes it's made him a much stronger driver.

"We were ready to do the three years there, because I thought it'd be really good for my development," he said.

"As things panned out, I think it has been very good for my development."