Williams George Russell could only laugh off the engine issue that forced him to retire from the Styrian Grand Prix, having been running in a strong points position. 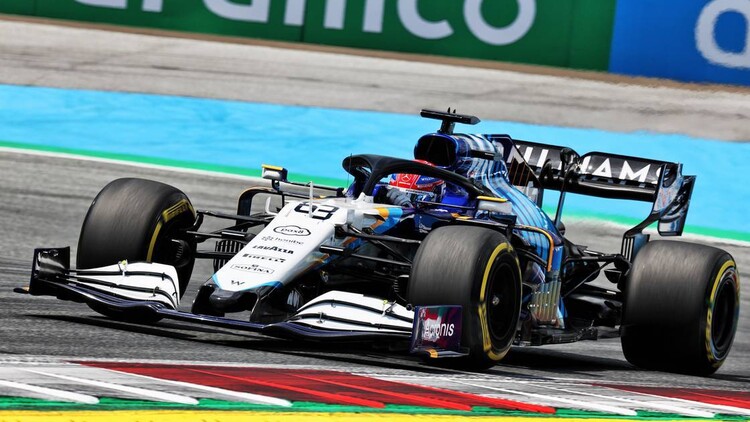 Having retired from a promising points position at the Styrian Grand Prix, a frustrated George Russell could only laugh as he pointed out that the pneumatic issue that sidelined him never happened when he was toiling away at the back over the past two seasons.

Russell was running seventh during the opening third of the Styrian GP, before an engine issue forced him to pit for a long stop as his team attempted to top up the pneumatic pressure. But the fix only bought Russell a few more laps before he was forced to retire.

"From my side, I didn't realise at all until I was sat in the pit stop for 20 odd seconds," Russell explained to media, including RacingNews365, on Thursday in Austria.

"With the issue, it wasn't affecting the driving or anything, it was only going to affect it when it got below a certain limit. And I think the car would have just switched off. So we obviously tried topping it up in the pitstop, but the rate of which it was depleting was pretty drastic. So I mean, it's just typical, isn't it?

"It doesn't happen in the two years before when we're last in every race, but the one time where, you know, truly in the points and we were on cours for a good result and was on the right strategy.

"The car was feeling good. We were really fast on Friday. Such a shame. But let's see, this is Formula 1. It's never meant to be easy, it's a brutal sport at times and good to just get back into it this weekend."

With Russell having made it up to seventh on merit, without any incidents or accidents helping him up the order, the British driver is hoping for another strong weekend in Austria after also having a reasonably competitive showing in France.

"I think we've had two really good weekends now for different reasons. I think [at] France we did a great job with the tyres at a circuit that was really difficult to manage them in the cooler conditions," he said.

"Last week, it was a very calm and settled weekend with no wind, we know that our cars pretty wind sensitive. So that definitely played into our strengths slightly. And we just did a really good job just optimising everything. And on such a short track, there's only probably a tenth between P8 and P15 which is the difference between a good and a rubbish weekend. So everything was just going in a good direction. Let's see this weekend if we can bring that over and obviously into Silverstone, that will be the next real test."

As for whether the Williams team are hoping for rain to hit the Austrian GP, as is mooted, Russell said he doesn't think it's as critical to the success of their weekend as it would usually be.

"Ordinarily, I would have said yes. But I mean, we've looked half decent in the last couple of races," he said.

"And it would be nice just to do it on pure merit. I think when we are struggling for pace, you know, we just want anything to give us a shot. But last weekend was so satisfying being there. Truly, so, I wouldn't be against it. I'll put it that way."