The Australian driver has claimed that having a laugh and a joke with his new teammate, Lando Norris, very much comes second to competing on track. 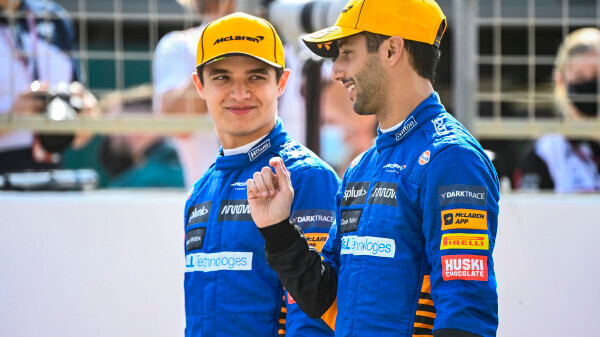 Daniel Ricciardo insists that banter with his new McLaren teammate wont get in the way of the pair competing at their very best out on track.

The 31-year-old joined the team for the 2021 season, but despite many fans heralding the pair as the funniest driver lineup this year, Ricciardo believes it won't come at the expense of race results.

"There's certainly going to be competition, you know, I think there's no sugarcoating at this level," Ricciardo told Formula1.com.

"I think there's certainly a respect amongst all drivers and especially teammates because a lot of the time you can be like, first rivals, so to speak."

Norris is also is known for being a jokester, having formed a very close and jovial relationship with former McLaren teammate Carlos Sainz.

The British driver claims to have a new level of focus when it comes for the 2021 F1 season, which could help create a memorable teammate battle between himself and Ricciardo.

"I think we [Ricciardo and Norris] actually executed a really good test together, I think the way we work together in the meetings, the debriefs tried to, let's say, assist the team to get better. I think that there was a really good relationship and camaraderie," Ricciardo continued.

"So I expect that to continue. And then you know, on track, I'm sure we'll have some battles. But I'll put the competition first and then the banter second, but I think if we can get the team to where we want it to be, then we should have some fun along the way."