Ricciardo wary of Ferrari progress: They're a step ahead now

McLaren's Daniel Ricciardo has said it's going to be difficult to keep Ferrari behind as the two legendary teams battle over third place. 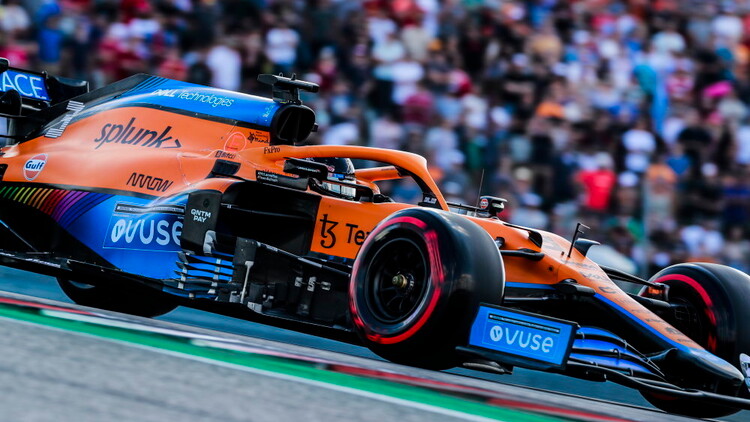 McLaren's Daniel Ricciardo believes that Ferrari are going to be very difficult to restrain in the final handful of races in the 2021 World Championship, as the two teams fight over third in the standings.

With five races remaining, just three and a half points separate third-placed McLaren from fourth-placed Ferrari.

After a season of form swinging back and forth between the two teams, a recent power unit update from the Scuderia appears to have given them the edge over McLaren in terms of pace.

Charles Leclerc claimed a relatively uncontested fourth place in both the Turkish and United States Grands Prix, with Ricciardo more than 20 seconds adrift in Austin.

As such, Ricciardo admitted that it's going to be very difficult for himself and teammate Lando Norris to keep the resurgent Ferraris behind in the championship.

"I don't want to be too pessimistic, but I think they have made that little step, which has just put them a nose in front at the majority of circuits," Ricciardo told media, including RacingNews365.com.

"We might still find the odd circuit when we've got a bit more, but I would say, generalising it, I think they are a little step in front now.

"I think we're gonna have to work pretty hard to keep them at bay in the Constructors' [Championship]."

Given that it's a straight fight between Ferrari and McLaren, two of Formula 1's traditional behemoth teams with a rivalry stretching back decades, Ricciardo said he's enjoying the scrap, even if he isn't treating them any differently to other teams.

"It's fun. It's obviously cool to to be fighting with them. Honestly, it doesn't change too much, whether it's them or someone else, but everyone knows Ferrari," he said.

"I guess maybe it keeps people interested... McLaren and Ferrari are two of the biggest teams in the sport, so it's cool to have a historic battle!"