Sergio Perez suffered a spin in Free Practice 1 at the Mexican Grand Prix, resulting in damage to his rear wing. Red Bull's Helmut Marko admits this is not an ideal situation. 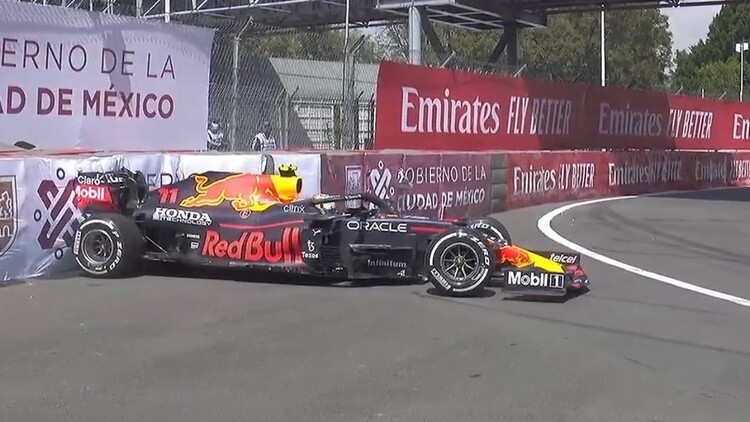 Red Bull advisor Helmut Marko admits that the damage sustained by Sergio Perez in his early spin at the Mexican Grand Prix has caused some concern.

The Mexican did not start his home race weekend in ideal circumstances when he slid off backwards at Turn 16, just 10 minutes into Free Practice 1 and moments after Charles Leclerc had done the same thing.

Perez's incident was at a slightly higher speed than the Ferrari driver's, though, and as a result he destroyed the left-hand side of his rear wing following contact with the barrier.

Marko fears that this could make life difficult for the team in terms of having enough spare parts left for the remaining races this season, particularly during the triple-header of Mexico, Brazil and Qatar.

"The rear wing is also completely broken. That is of course a handicap because we have three races in a row and we have almost no spare parts left."

The Autodromo Hermanos Rodriguez circuit proved to be slippery during the first practice session on Friday due to a layer of dust covering the tarmac.

Marko believes that the conditions will quickly improve, something that was seen during Free Practice 2, where Max Verstappen led the way ahead of Mercedes drivers Valtteri Bottas and Lewis Hamilton.

"There's a lot of dust because there's hardly any racing here," the Austrian explained. "That means there will be a considerable improvement in terms of lap time.

"However, we took that into account and that's why we started on Hard tyres on Friday, because we think that if the track is really free of debris, the degradation and tyre wear will be very low."

The high altitude nature of the Mexico City venue means that tyre wear is generally very low, and a one-stop strategy is usually the favoured one.