McLaren's Lando Norris was able to capture his first podium in Formula 1 at the season-opening Austrian Grand Prix last year. The British driver has described it as a massive confidence boost in an interview with RacingNews365. 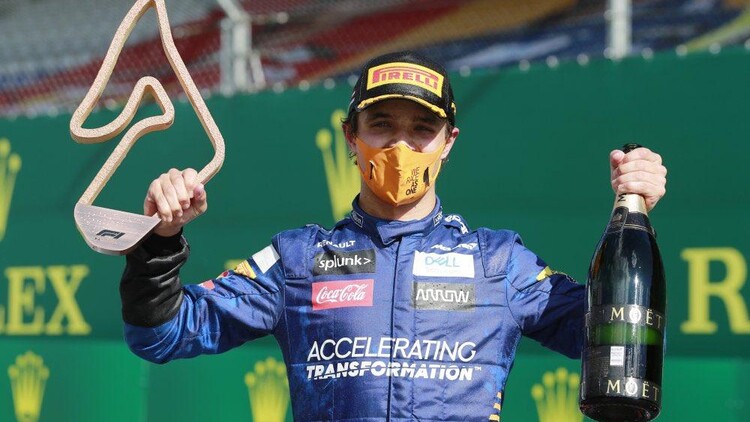 As the number of laps started winding down, Alexander Albon tried an optimistic pass on Lewis Hamilton while fighting for second place at the season-opening race of the 2020 Formula 1 season. However the ambitious move didn't work out, with the Red Bull driver spinning out and the Mercedes man, who was deemed responsible for the collision, earning himself a five second penalty in the process.

Lando Norris who at the time had worked himself up into fourth had two laps to get within the five-second difference to his compatriot, which after a set of perfect laps he was able to do, bringing the difference down from 6.5 seconds to 4.8 seconds of the Mercedes driver and securing his maiden podium by just two-tenths of a second.

"The podium finish at the Grand Prix of Austria last season certainly helped myself and the team to become even more motivated for the rest of the season", Norris told select members of the press, including RacingNews365.com.

"It was an important moment for myself, but also for the team. We started the season well and that laid a very good foundation for McLaren. I was rarely in the right position to take a podium in 2019. That's why I worked hard over the winter to make sure I was more consistent throughout the race.

"Everyone at McLaren was really happy with that result, but I still think it was even better for me. Especially since the year before I was never really in the right position to take advantage of some situations to get on the podium."

With McLaren switching to Mercedes power in 2021, the aim for Norris will be to add to his solitary podium in Formula 1.