Mercedes pleased to have forced Red Bull into 'taking risks'

The United States Grand Prix weekend might have been a difficult one for Mercedes, but the team are taking positives from the amount of pressure they were still able to apply to Red Bull. 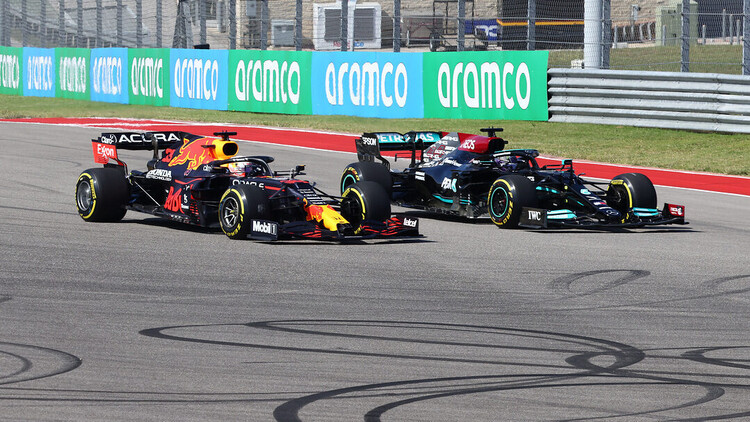 Mercedes feel pleased that that they were still able to put pressure on Red Bull during the United States Grand Prix, despite not being able to match their rivals' pace.

After initial signs of promise in Free Practice 1, the Silver Arrows struggled in comparison to Max Verstappen's team throughout the rest of the weekend in Austin, and Lewis Hamilton eventually lost out on the win to the Dutchman.

However, Mercedes' Trackside Engineering Director, Andrew Shovlin, says that they are focusing on the positives, with one of these being that the win was not necessarily a straightforward one for Red Bull.

"On Sunday, while Max had us beat, I don't think that was a comfortable win for them," Shovlin told select media, including RacingNews365.com.

"We were sort of forcing them to take some risks, and if that's a bad race for us, then hopefully if we can have more of the good ones we're still in a decent position."

Shovlin also feels that, whilst Red Bull had the advantage at the Circuit of the Americas, it was not as great as the edge that Mercedes have had at previous tracks.

"I think the pace that we showed in Turkey and Sochi, particularly in terms of race pace, probably put us a bit further ahead of them than they've been ahead of us here," Shovlin explained.

"Qualifying was tricky here, and we sort of managed to get through that still with a car on the front row.

"But it really will just come down to where the cars stack up over the remaining races [and] who adapts well. But for us, the encouraging thing was we could still put them under pressure when we clearly didn't have the best car."

Verstappen now has a 12-point lead over Hamilton in the World Championship standings, whilst Mercedes remain ahead of Red Bull by 23 points in the Constructors'.