Mercedes explain why they initially struggled in Belgian GP qualifying

James Vowles has explained why Mercedes failed to initially get to grips with the wet conditions during qualifying for the Belgian Grand Prix. 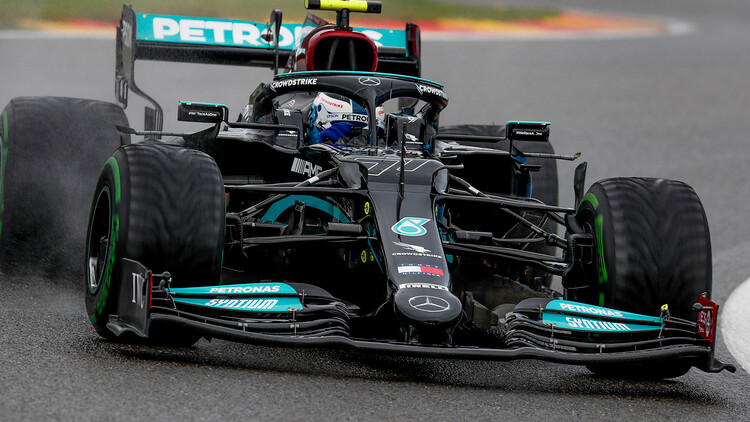 Mercedes' Strategy Director, James Vowles, says a mixture of reasons led to a tricky qualifying for Lewis Hamilton and Valtteri Bottas at the Belgian Grand Prix.

Both drivers were nearly eliminated in the second part of qualifying and relied on their final lap in Q2 to progress to Q3. Mercedes opted to not go with an entirely wet setup, as Hamilton qualified in third and Bottas qualified in eighth.

"We definitely didn't do the right programme during qualifying, not just during Q3, but I don't think we did the optimum in Q1 or in Q2 either," explained Vowles.

"Every single lap that a driver has available to them matters in those conditions. Spa is incredibly difficult as a track in the dry, now add the fact that Turn 1, which isn't really a corner, it's one braking zone, the first proper corner they experience is Eau Rouge, up and through and in the wet that is flat or nearly flat.

"With the W12, we weren't quite on the pace of others. In Q2, I think it is fair to say we had new sets of tyres as did other cars and [Lando] Norris, and his lap was faster, but they were also running a downforce level more suited to it.

"We went for a setup that was a little bit more balanced for conditions that could be drier than they were, and especially the setup that I think that had Sunday been [Intermediate] conditions, or varying between Inters to going towards dry, we would have been very strong, but that's not what happened.

"We had a little bit of a bias that would have suited other cars on Saturday. The second is that in those conditions we missed out on some essential laps for the drivers.

"[At the] beginning of Q2, they were trafficked on their lap, then on the second lap the tyres weren't quite at their best and we stopped and fitted new ones in the box, and when we did, you saw Lewis moved up to the top of the timesheets, so we had a car that could be competitive in those conditions, but everything had to be right for the drivers.

"We had a little bit of locking, a little bit of struggling just to get the car slowed down, not just ourselves but other cars as well into a few of the turns, Turn 1 and Turn 5 probably being predominantly the key areas."

Hamilton was pipped to the front row by George Russell, who executed a stunning lap in Q3 in his Williams.

Russell went for one big effort at the end of the session whereas both Mercedes drivers and pole-sitter Max Verstappen executed a fast lap, followed by a slow lap, and then one a final flying lap. Vowles believes Williams went for the better strategy.

"Come Q3, George's lap was obviously incredible but also the programme they completed I feel would have helped them," said Vowles.

"Verstappen did the same programme [as us], but that middle lap just took a lot of temperature out of the tyres.

"But I feel we just took too much out of our tyres by doing this. They weren't quite ready and that is what we saw in Turn 1, we just weren't in the right place on grip.

"George's programme was one where they knew they couldn't push immediately after they went out on the X Wets, they had to do a slow preparation lap and actually, overall, I think in those conditions that might have been the right programme."