Mercedes engineer Andrew Shovlin has explained how Valtteri Bottas' race went wrong to the point where he was being overtaken by Williams' George Russell. 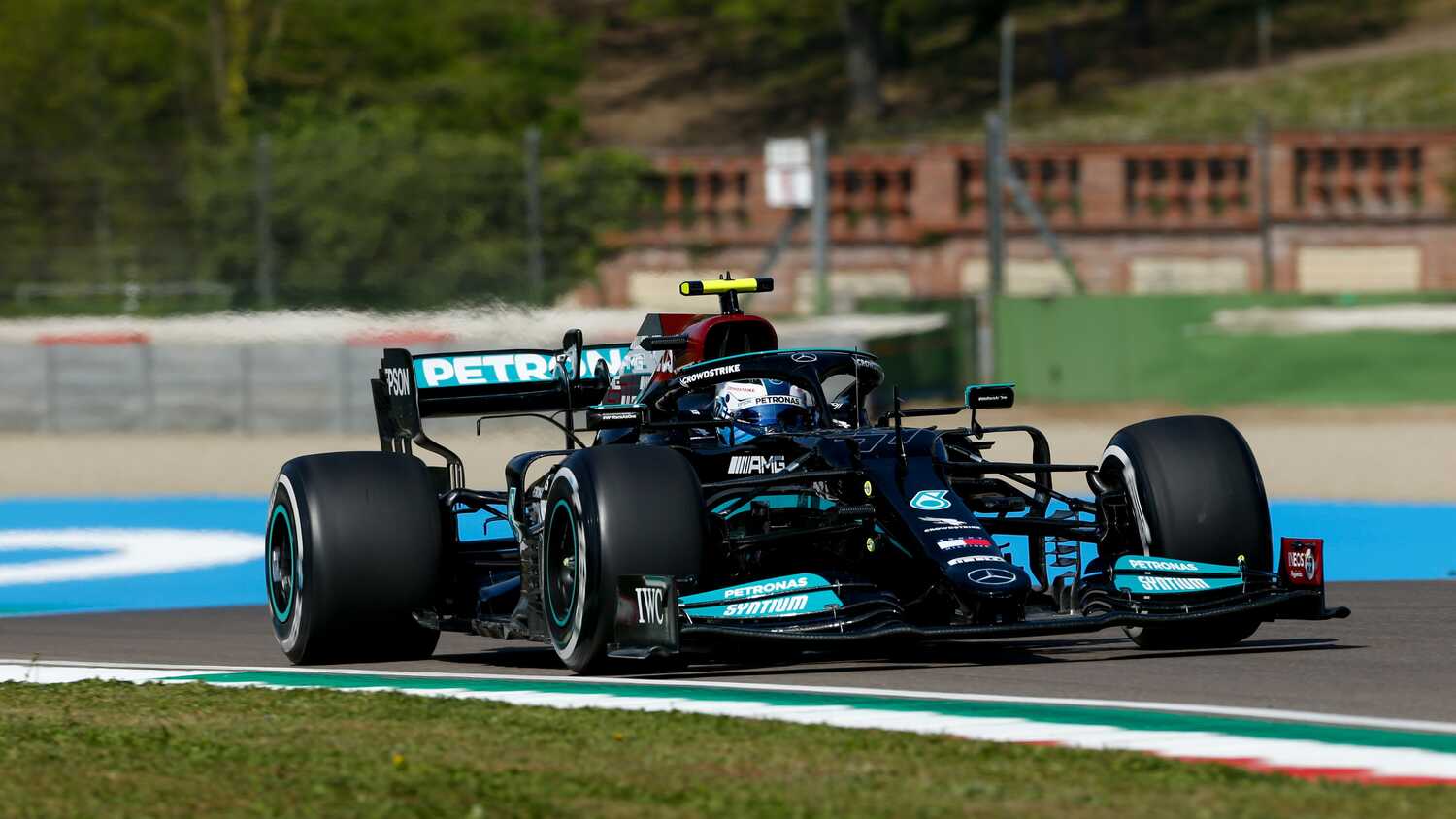 Mercedes' Andrew Shovlin has explained the circumstances that led to Valtteri Bottas, in a front-running, race-winning W12, ended up in a position to be legitimately overtaken by George Russell's Williams prior to their race-ending smash.

Starting Lap 32, Russell lost control of his Williams on the damp patch off the racing line and slammed into the side of the Mercedes, having been in a position to overtake, using DRS, around the outside into Tamburello.

It was an unusual crash, in more ways than one, as it's not particularly often you see an undamaged Mercedes being overtaken for position by one of the slowest cars on the grid.

"Valtteri's weekend was really down to a few key moments," Shovlin explained to media, including RacingNews365, after the race.

"He did look very strong on Friday and was in a good position, very happy with the car. qualifying, he seemed to be struggling a little bit more for the tyre temperature than Lewis.

"The lap that he did in Q1, on his first run, would have put in the top four. He just couldn't match that lap, that was the third lap on the tyres. Moving to the first lap, he wasn't really able to match that. So, there's something there we need to understand. The thing with tyre temperature, there is often a very small difference but has a very big impact on grip.

"Unfortunately for Valtteri, he was just the wrong side of a lot of cars. And that gave him a very compromised start position. So that's one thing that we've got to go off and work on with him and help him understand."

Having started from eighth place on the grid, Bottas struggled to make an impact and move forward from there throughout the race, in stark contrast to what Lewis Hamilton was able to do later in the race after the restart.

Shovlin explained that Bottas had struggled throughout the entire race with tyre warm-up and getting the grip from the tyres being in the correct temperature window.

"He was struggling following and being able to overtake just because he was losing front end in the tow," Shovlin said.

"But, also, the rear wasn't strong. Again, it was that theme of warmup was a problem for him. Then, on the transition to medium, the warmup meant that he got caught in that bunch of cars where some were backmarkers, and some where Max [Verstappen] was there as a leader coming through. That was what really triggered the sequence that ended his race."

Despite Bottas' poor performance, Shovlin explained that there were still hints and flashes of speed that would allow Mercedes to go and focus on why he wasn't able to be consistent with that pace.

"So, there have been bits in the weekend where he's definitely looked very strong," Shovlin said.

"Parts where he actually looked like he was going to give Lewis a very tough time. And really, I think all the negatives have come down to this issue of warm up in those conditions.

"We need to find a solution to that. And I think if we do that, then the rest of it should click into place."