Toto Wolff has confirmed Mercedes will discuss the use of team orders before the Mexican GP, to help Lewis Hamilton in the title race. 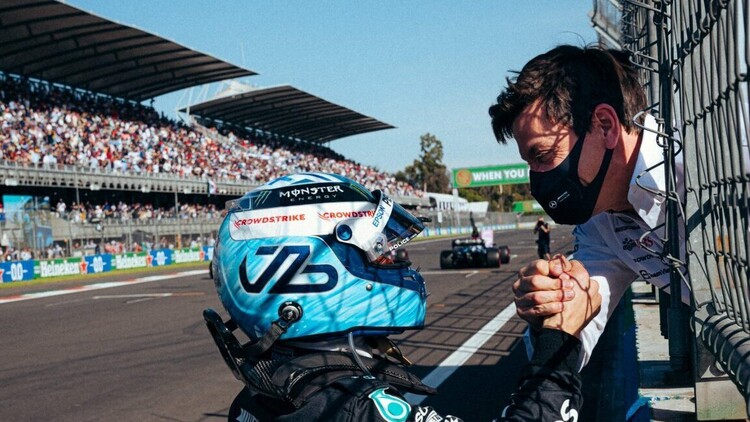 Mercedes Team Principal Toto Wolff admits he will discuss the potential use of team orders with Valtteri Bottas and Lewis Hamilton ahead of the Mexican Grand Prix.

Bottas will start the race from pole position, after a lap he described as "one of his best" in qualifying, with Hamilton and championship leader Max Verstappen behind.

Hamilton is 12 points adrift of Verstappen in the Drivers' Championship, and there are seven points to be gained from winning the race, compared to finishing in second place.

Bottas has sacrificed a race win for Hamilton in the past, most notably at the 2018 Russian GP.

"We haven't discussed it [yet] because we felt that we were not in a position to consider to talk about it," Wolff told media, including RacingNews365.com. "It would have been such a long shot, talking about the victory before qualifying.

"Obviously, the situation is different now and we're going to address it on Sunday in the morning, like we always do in the strategy meeting.

"In a way, I'm a racer and such discussion is something that is always disappointing. But sometimes the circumstances oblige it.

"We will address it and discuss it first with Valtteri and Lewis, because they are both involved in such discussion. Then, [we will] see whether the race scenario obliges us to make such a call."

Mercedes trailed Red Bull by a substantial margin in the second and third practice sessions, with Verstappen widely expected to take pole position.

As the temperature increased in Mexico City, it seemed to favour the W12 and gave Mercedes the opportunity to lock out the front row for the first time this season

Wolff described F1 in 2021 as "fascinating" and thought Hamilton and Bottas were fighting for second place in qualifying.

"We were all surprised," said Wolff. "It was pretty obvious that Max will take pole [before qualifying] and that it would be a fight between us and Perez for the other positions.

"We could see that qualifying really came towards us. On the Medium we started really to outperform them and at no point in Q3 did they have a lead in any of the laps. Also, I believe that in the last lap they were behind.

"That's what makes the sport for me so fascinating, that from one session to the other, performance can swing. We've seen it to our detriment in Austin and now it has happened to our advantage here in Mexico."