How Norris factored into Hamilton letting Bottas past

In the end Lewis Hamilton could do little to avoid dropping off the podium after damaging his Mercedes in Austria according to Andrew Shovlin. 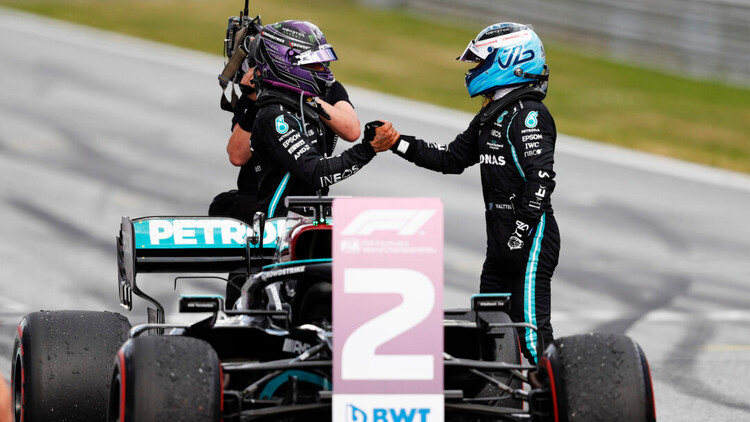 Andrew Shovlin explained that once Mercedes saw Lewis Hamilton's lap times in Austria after damaging his car, the team had no choice but to let Valtteri Bottas through due to the threat posed by Lando Norris.

The Finn ended the race in second spot ahead of the McLaren driver with Hamilton having to settle for fourth after damaging the aerodynamic devices around the rear of his car. Shovlin stated that after diagnosing Lewis' issues, the team knew right away that there was little they could to bring him home in second.

"Initially once we diagnosed the performance problem on Lewis’s car, we were just seeing where his lap times actually stabilised but it became clear pretty early on that he was going to find it impossible to defend against Norris behind," Shovlin stated on Mercedes' Austrian GP Debrief video on YouTube.

"We were worried that Valtteri in the middle of that battle was going to ultimately be vulnerable, but what we were waiting for was just for Lando to actually get close enough where he was a risk to Valtteri and that was what triggered our decision to invert the order.

"So, you saw Lewis let Valtteri get by, and then ultimately Lando was able to overtake Lewis, but as I said, once we understood the extent of the damage, we concluded pretty early on that hanging on to that third place was going to be effectively impossible.”

Norris showed McLaren had the pace early on during the Austrian GP as he kept Hamilton at bay for several laps. Shovlin explained why getting past the McLaren driver proved so difficult for Hamilton.

"It’s because Lando was quite quick and we didn’t have a very big performance advantage," Shovlin added. "You have got to sit very close, you are around one second behind, you have less downforce, the car is sliding around and the tyres get hotter and you lose grip.

"So it took Lewis most of that stint, once he did get by, you saw that he was able to pull a bit of a gap. He also commented about how Lando was driving so well. What he meant there was simply that Lando wasn’t making any mistakes, because when they are behind another driver, what they are really looking for is that driver to lock a wheel or get a snap of oversteer on exit that just holds them back enough so that they can actually make the move.

"Unfortunately for Lewis through that stint Lando drove pretty much perfectly.”