How momentum swung from Mercedes to Red Bull at Monza

Mercedes entered Saturday's Sprint action at Monza with things slanted in their favour, but a poor start from Lewis Hamilton and a solid drive from Max Verstappen have Red Bull dreaming big. RacingNews365.com looks at the key factors that could decide the Italian Grand Prix. 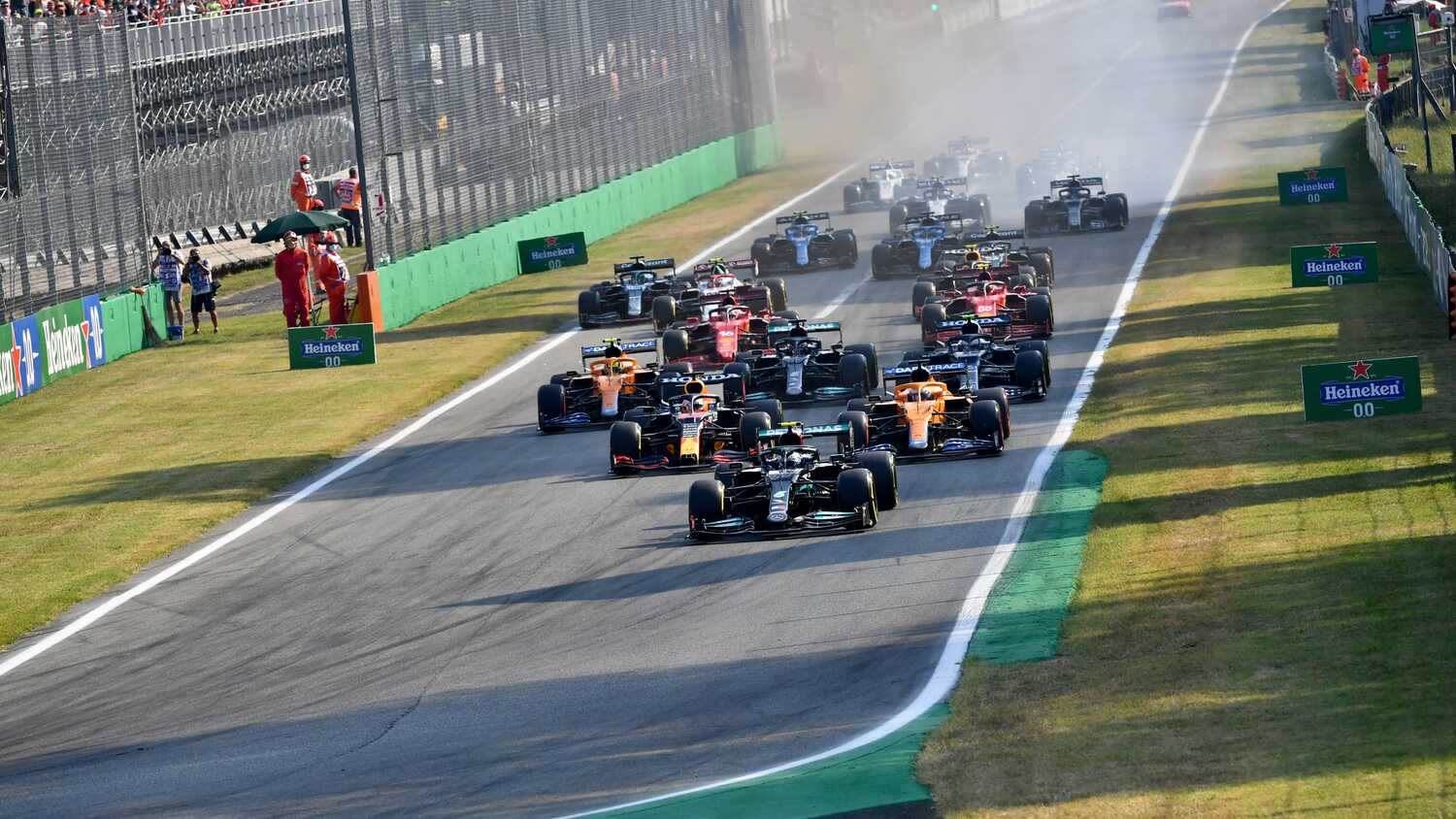 Valtteri Bottas may have won F1's second Sprint Qualifying race of the season at Monza, but Red Bull will be feeling they were the real winners on Saturday.

Max Verstappen took advantage of Lewis Hamilton's poor start to finish second behind Bottas, a result that not only extends his lead in the Drivers' Championship to five points, but also sees him start Sunday's Italian Grand Prix from pole position.

While Mercedes' decision to change Bottas' engine – a move that seemed certain to pay dividends on Saturday – still looks like it was the right call, the dynamics have changed heading into tomorrow's action.

As we prepare for what looks set to be a fascinating race at Monza, RacingNews365.com presents the story of the weekend so far.

What a difference a day makes for Mercedes

How quickly things can change...

It all looked so positive for Mercedes following qualifying on Friday. Bottas had claimed top spot for Saturday's Sprint Qualifying, aided by his new Mercedes engine.

Given the Finn wouldn't have to serve his grid penalty until Sunday's Italian Grand Prix, a race that should favour Mercedes on paper, he was poised to help teammate Hamilton's quest to take points away from Verstappen in the Sprint.

To say things didn't exactly go to plan for Mercedes would be an understatement. Hamilton was slow off the line, Toto Wolff later stating the Briton made an uncharacteristic mistake with the clutch that ultimately saw him fall behind both McLaren drivers and Pierre Gasly.

While the AlphaTauri driver saw his afternoon end early after crashing, the thought was that Hamilton would eventually reel in Lando Norris and Daniel Ricciardo, given that they started the Sprint on Soft tyres.

Instead, the seven-time World Champion wasn't able to claw his way back, failing to make the most of Bottas' strong pace out front and eventually having to settle for fifth on the day.

Bottas' grid penalty means that Hamilton will start fourth on Sunday, which isn't the way anyone at Mercedes thought the championship contender would be aided by his teammate.

Hamilton's disappointment was summed up by his comments following Saturday's action, as he believes Verstappen has an easy path to victory on Sunday.

Verstappen was able to keep pace with Bottas throughout the Sprint as he settled for two points knowing full well that the Mercedes driver's penalty would see him dropped to the back of the grid.

It's hard to argue with Hamilton's prediction given what we've seen from Red Bull so far this weekend, but Saturday once again showed that the battle for the 2021 World Championship still has some surprises up its sleeve. 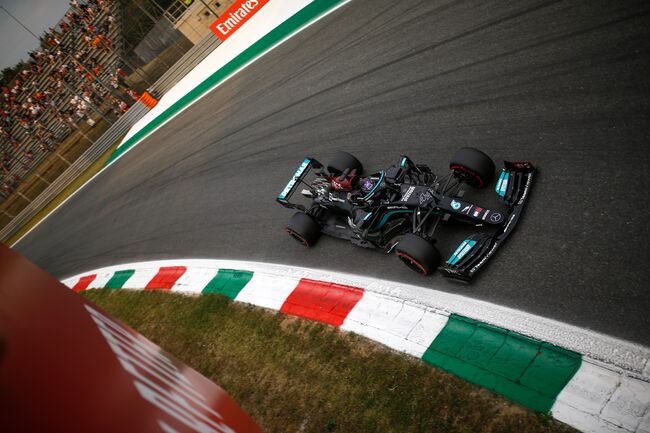 Despite leading the World Championship for much of the first half of the season, there was always the feeling that luck wasn't always on Verstappen's side.

Whether it was the late tyre blowout that cost him victory in Azerbaijan, the first lap collision with Hamilton at Silverstone or having his race in Hungary compromised at Turn 1, some argued that the Red Bull driver's points tally didn't accurately reflect his performance on track.

Saturday's action at Monza may have changed that narrative as Red bull have the opportunity to deal a real blow to Mercedes at a track that has rarely been kind to them in the past.

"We would never have thought of pole, but what is even more encouraging is the speed in the race," Marko told Austrian broadcaster ORF, clearly thrilled by what played in the Sprint.

"Bottas had a brand new engine and still didn't pull away, the gap was consistently 1.8 to 1.9 seconds.

"As we saw with Hamilton and [Sergio] Perez, overtaking is virtually impossible. If the start is successful tomorrow, we can already start dreaming of victory."

Verstappen himself was a little more reserved, stating that he expected Bottas to make his way through the field while keeping a close eye on Hamilton, given that he'll start P4.

He'll also have to fend off the high-flying McLaren duo of Ricciardo and Norris, who start second and third with their Mercedes power units.

The lone blemish on Red Bull's day was Perez's performance, as he wasn't able to make up any ground after a disappointing Friday and finished P9.

Nevertheless, momentum is firmly on Red Bull's side, as a clean run through Turn 1 would give Verstappen a real chance to strengthen his championship bid at a track he likely thought that wouldn't be possible.

Can McLaren throw a spanner in the works?

After an anonymous performance at Zandvoort that saw both drivers well off the pace, McLaren have answered back by delivering in Italy.

Thanks to Hamilton's slow get away on Saturday, both Ricciardo and Norris made the most of the opportunity and, as a result, they'll start P2 and P3 respectively on Sunday.

While the Australian has delivered some solid results already this season, it's safe to say that his performances on Friday and Saturday at Monza have made this his most convincing weekend so far.

Ricciardo was angry at finishing 0.006 seconds behind Norris on Friday, so placing ahead of the Briton on Saturday should put him in a better mood heading into Sunday.

As for Norris, who starts on the second row, he already said that his sights were set on attacking Verstappen during the Sprint race – a mentality we expect him to carry into Sunday.

Having kept Hamilton at bay throughout the 18-lap race, McLaren showed that they have the pace to make a bid for top spot at the Italian Grand Prix.

Even if that proves a step too far, there's no reason both drivers shouldn't be aiming for podium finishes. 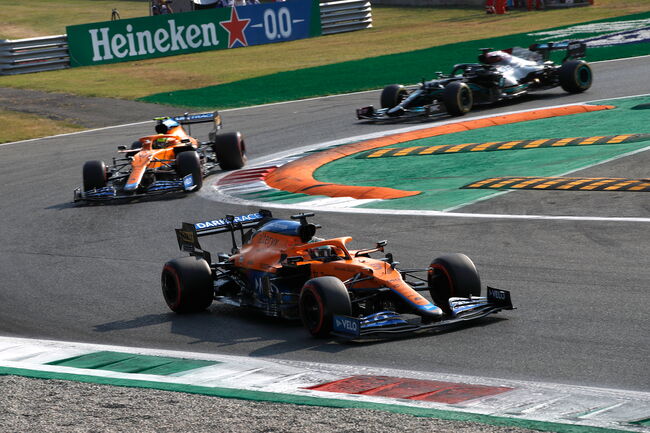 Ferrari and Giovinazzi keen to deliver at home

Having raced behind closed doors in Italy four times in the last year, this weekend's Italian Grand Prix is the first event since the 2019 edition of the race to feature fans in the grandstands.

There's no question as to who the Tifosi are cheering for, but it's been an up and down weekend from Ferrari.

Charles Leclerc suffered from engine issues on Friday, while the Monegasque driver ended his final practice session on Saturday early after feeling unwell in the car.

Carlos Sainz didn't start his Saturday well either, crashing heavily at Ascari and giving his mechanics another significant repair job after last weekend's venture off track at Zandvoort.

In the end, both drivers took part in the Sprint and put in solid if unspectacular efforts, securing an all Ferrari third row for Sunday's race.

While their efforts did little to suggest they'll be able to challenge the likes of Red Bull, Mercedes and McLaren, anything can happen at Monza, especially if Ferrari get ahead of their rivals at a track that has proven difficult to overtake at.

And if Italian fans are looking for more good news, they only need to look back at the fourth row.

After a stellar showing in qualifying at the Dutch GP, Antonio Giovinazzi continued his strong form by finishing the Sprint in P8.

The Italian got past Perez and kept the Red Bull driver at bay in the closing stages to secure seventh on the grid for tomorrow's race.

His home fans will be hoping he turns this performance into a strong finish, something he was unable to do at Zandvoort after coming home in 14th.