Fans at the British GP got a closer look at the McLaren MP4-25 that Lewis Hamilton drove to victory in Turkey in 2010, with the car being sold soon after at an auction. 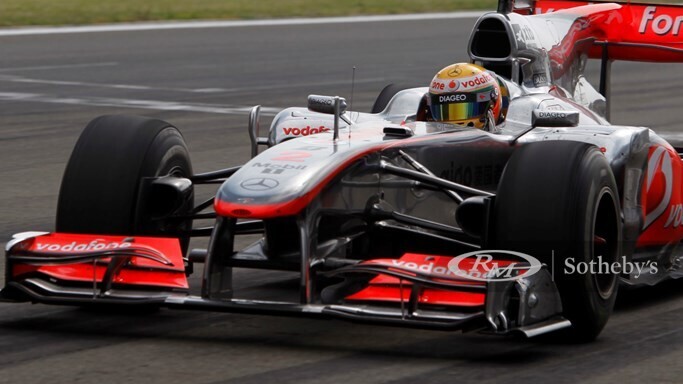 Lewis Hamilton's days as a McLaren driver have long been over, but that hasn't stopped the MP4-25A that he drove to victory at the 2010 Turkish GP from being sold for a hefty fee recently.

That year saw the Briton joined by Jenson Button at the Woking outfit, and the two combined to win five races. Hamilton took three of those victories, with the team finishing one-two on three occasions.

One of those one-two finishes came in Turkey with Hamilton beating Button by just under three seconds, and at a recent RM Sotheby's auction the car used by the former was sold for £4.83 million, which roughly comes to €5.64m. The car's profile was boosted at the British GP as McLaren put on a demonstration following Sprint Qualifying at Silverstone on July 17, meaning 140,000 fans got a closer look at the car.

"This remarkable car attracted significant interest from collectors around the world wishing to acquire an important piece of motorsport and F1 history, driven to victory by the Sport’s most successful ever driver," read a statement on the Sotheby's website. "The car is fully race prepared by McLaren Racing’s Heritage team, and ran its demonstration laps fully supported by McLaren and Mercedes technicians.

"Powering its way around the Silverstone circuit in the hands of McLaren test driver, Rob Garofall, the excited crowd were witnessing auction history and reveled in the sound the mighty Mercedes Benz 2.4 litre V8 engine. Bids for the car were received online, on the telephones and in person at Silverstone."

This car marks the first time a Hamilton F1 car has ever been offered for public sale, adding to the uniqueness of the occasion.