Hamilton hopes his car setup will pay off in the race

Lewis Hamilton hopes he and Mercedes have struck "the best balance possible" with their car setup for the Belgian Grand Prix. 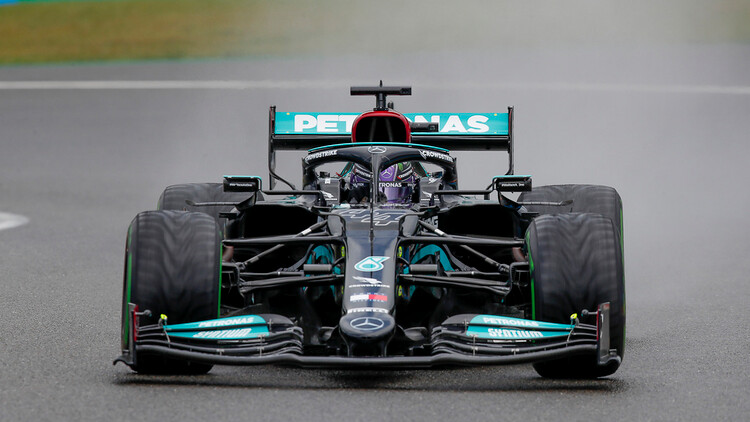 Lewis Hamilton is hopeful that he and Mercedes have made the right call with their car setup for Sunday's Belgian Grand Prix, which is geared towards drier conditions, after having to settle for third in a wet qualifying session at Spa-Francorchamps.

Hamilton was unable to prevent Red Bull's Max Verstappen from taking pole position in a dramatic end to qualifying, while also being pipped by Williams driver George Russell, who starred once again in tricky conditions.

However, alluding to various tests conducted throughout practice with higher and lower downforce rear wings, Hamilton is optimistic of being in a strong position to challenge for victory in race-trim.

Mercedes are seemingly running a lower downforce setup in comparison to main rival Red Bull, with hopes for a drier race.

"It's been a very difficult day for everyone. I just tried to stay positive, focused and calm," Hamilton reflected after qualifying. "My first lap was really good, the second one I struggled a little bit.

"If [the weather is] like this tomorrow, it's going to be tricky.

"This balance of straight line speed versus mid-section downforce... I think we've tried to strike the best balance possible. Maybe it's not the best for today, we'll see tomorrow exactly how good it is.

"Otherwise, I'm really grateful to the team for just keeping their cool during this session."

Hamilton, who praised Verstappen and Russell for their qualifying performances, admits his quest for victory has been made more difficult by teammate Valtteri Bottas' low-key session.

Bottas could only manage eighth in Q3 and will take a five-place grid penalty for causing the first corner crash at the Hungarian Grand Prix, meaning he will start back in 13th, leaving Hamilton to face the two Red Bulls alone – Sergio Perez lining up seventh.

"I don't really know what happened with Valtteri, but it's unfortunate, because I have two Red Bulls not too far away," added Hamilton. "That's going to make it a little bit harder in terms of strategy, because Valtteri has a penalty also.

"Nonetheless, we'll do everything we can. As I said, tomorrow's another day. I hope that it's not crazy rain like this, but interchangeable could be fun."