Lewis Hamilton was delighted after claiming top spot during Friday's qualifying session in Brazil, with the seven-time World Champion thanking his Mercedes team for their efforts in recent days. 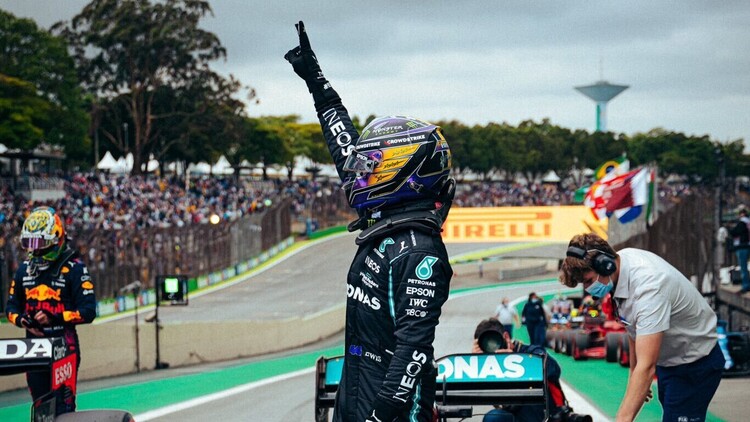 Lewis Hamilton credited Mercedes and the "insane" hours put in by the team to get his car ready after topping the timesheets in Friday's qualifying session for the Brazilian Grand Prix.

Although the Briton will serve a five-place grid penalty in Sunday's Sao Paulo Grand Prix, he will start Saturday's Sprint race in P1.

After the session, Hamilton was quick to thank the team for their effort in getting his car up to speed, given the quick turnaround from last weekend's race in Mexico.

"A big thank you to all the team, because they've been working flat out," said Hamilton after qualifying.

"It's been so hard coming from the last race, going from one race to the other, taking the car apart, rebuilding it... The man-hours [are] insane.

"Today was a really good qualifying session, I'm super happy with it. We've got the penalty tomorrow, but we'll give it everything we've got."

Looking ahead to Sunday's Grand Prix, Hamilton admits it will be tough to make his way through the field and catch title rival Max Verstappen, who starts Saturday's Sprint race in P2.

Hamilton added: "It's not easy to follow, and Max is obviously starting on pole now [as things stand]. It's going to be very hard to catch him, but I'll do my best to try and get through the field.

"I don't know what tomorrow will hold. I think the weather will perhaps be better tomorrow, which makes it a little bit more difficult for everyone.

"[But] I feel really grateful. It's crazy because it's been a while [since claiming pole position], so it just feels like the first."