Hamilton at risk of qualifying exclusion over technical breach

Lewis Hamilton's referral to the stewards in Brazil could have huge ramifications for his weekend. 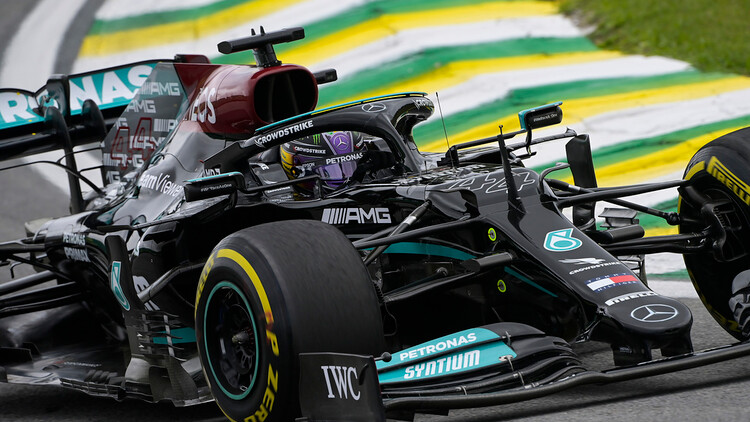 Lewis Hamilton's Brazilian Grand Prix weekend could be about to get much more difficult than it already was, with the reigning World Champion's car being referred to the stewards at Interlagos.

Having gone quickest in qualifying, beating Max Verstappen by four-tenths of a second in Q3, Hamilton's W12 was found, in scrutineering, to be in contravention of one of the rules regarding the operation of the car.

Mercedes have been formally summoned before the stewards for an alleged breach of the Technical Regulations relating to the DRS (Drag Reduction System). The exact regulation states: "The distance between adjacent sections at any longitudinal vertical plane must lie between 10mm and 15mm at their closest position, except when this distance must lie between 10mm and 85mm when the DRS system is deployed."

Put simply, Hamilton's DRS is alleged to have opened up further than the permitted range. This would have the effect of reducing drag, and increasing top speed, further than what is permitted by the regulations for the parameters of the DRS.

What's next for Hamilton?

Unfortunately for Hamilton, this appears to be a pretty 'open and shut' case for the stewards to decide on. The nature of technical breaches tends to mean that there is no grey area and that if Hamilton's DRS was able to open too wide, that's a breach of the Technical Regulations.

This means that Hamilton would be excluded from qualifying and have the effect of him being forced to start the Sprint Qualifying race from the pit lane, as he will essentially be viewed as not having taken part in Friday qualifying.

Adding to his woes is the fact that the car is in parc ferme conditions as of the start of qualifying, meaning he would also start from the pit lane if any sort of setup change is required to make the car conform with the regulations.

This would be disastrous for Hamilton, as his grid position for Sunday's race will be determined by his Sprint Qualifying finishing position. He will have 24 laps to climb as many positions as possible, but will then serve his entirely separate engine change grid penalty that will demote him five positions from wherever he finishes Sprint Qualifying.

Should Hamilton be excluded from qualifying, as is likely, it will promote championship leader Max Verstappen into the top spot for the start of the Sprint Qualifying race.