The former Formula 1 driver has been trying to sell the idea of racing in IndyCar to Alexander Albon, with the possibility of the Red Bull reserve joining the series in 2022. 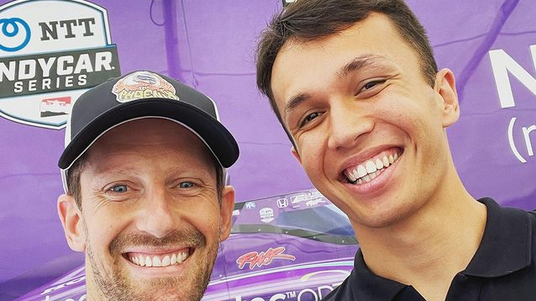 Romain Grosjean has been encouraging Alexander Albon to join IndyCar, according to the Frenchman's team boss, Dale Coyne.

Albon is currently Red Bull's F1 reserve driver and has also been racing in DTM this year, but he stated he would "like to see what's out there" which is why he was at Indianapolis at the weekend when IndyCar visited the 'Brickyard'.

“Alex was talking to lots of people,” Coyne told Autosport “He’s been on our radar for a while and we’ve been speaking with him for over a year now and he’s interested, for sure.

“Romain is a great salesman for us, showing what we can do as a team, but he’s also the best salesman for IndyCar. Him and Alex talked together for quite a while.

“They talked about how nice it is in the series, how competitive you can be in these cars, what they’re like to drive – natural, instinctive, so you can get on it straight away, like we saw from [Christian] Lundgaard.

“Romain was telling him it was fun to be in IndyCar, a lot of less pressure, better relationships between teams, team owners, and between drivers. I think Alex appreciates that the teams here aren’t set up to have one guy as number one and the other as the bridesmaid. That’s something Alex has been through, right?

“It’s different here. If your two guys have two different driving styles, you can generally change each car to suit its driver.

"Now, that might hurt a bit if they’re very different [as] their feedback isn’t going to help the other one so much. There’s more work and one driving style and engineering philosophy may suit a track better than the other.

“But if having them on different setups helps get the best out of each driver individually, then you can do that in IndyCar. We’ve had it that way before, we think we’re pretty good at it and it can work out well.

“So anyway, I think if they’re used to the pressure of Formula 3, 2 and especially Formula 1, drivers find IndyCar a breath of fresh air. The hard work is what’s done on track, in pit lane and in the engineering trailer. There’s not the politicking and pressure.”

Albon has previously confirmed if an opportunity does not come up in F1, he would consider joining a strong team in IndyCar. Coyne was asked whether Albon would come with financial backing from Red Bull or Honda if he did join the American single-seater series.

“I don’t think so, but we haven’t gone into that detail yet," said Coyna. "He was just talking with lots of people, enjoying the weekend.