Five of the most dramatic Belgian GPs in F1 history

Drama and Spa are no strangers to one another with the Belgian GP often providing memorable moments. RacingNews365.com looks back at five of the most dramatic Belgian GPs ahead of the 2021 edition. 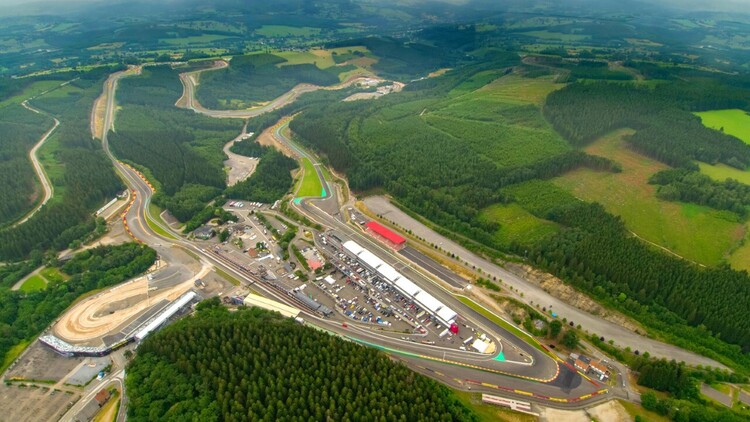 Known for its unpredictable weather, the Belgian GP rarely disappoints when it comes to on-track action.

Whilst the event hasn't always been held at the Circuit de Spa-Francorchamps, the venue has become synonymous with the Belgian GP. The iconic track was one of seven included in F1's maiden championship in 1950, with its mix of long straights and challenging corners often mentioned as a favourite of the drivers.

While Spa has undergone quite a few changes since being built in 1921, the biggest being that the 7.004km circuit is only half the original length, it still delivers in terms of excitement. Here's a look at five of the most dramatic Belgian GPs in F1 history.

Numerous incidents happened in the opening laps, with four drivers forced to retire while several others continued on as the Safety Car took to the track. When the race resumed Trulli led from Fernando Alonso and David Coulthard, with Schumacher falling down the grid.

By Lap 12 Alonso led after Trulli pitted, however the Spaniard spun twice at Les Combes after suffering an oil leak, handing the lead to Kimi Raikkonen. Although Alonso was able to continue, a further spin at Rivage finally ended his afternoon.

Trulli and Juan Pablo Montoya collided on Lap 20, while the likes of Coulthard and Jenson Button both suffered tyre de-laminations. The latter spun at close to 330km/h, crashing into the Minardi of Zsolt Baumgartner as both drivers retired and the Safety Car was deployed again.

This opened the door for Raikkonen to take the lead and claim his only victory of the 2004 F1 season. More importantly, however, Schumacher bounced back from his early struggles to finish second and claim his seventh World Drivers' Championship with four races to spare, while Rubens Barrichello rounded out the podium. 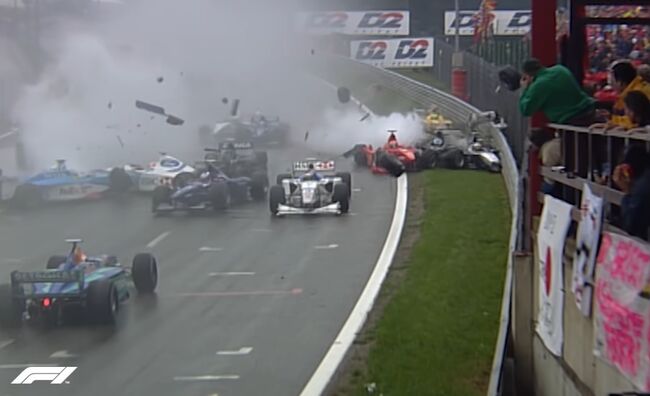 The Belgian GP serves up entertainment most years, however the 1998 edition of the race has to go down as one of the most chaotic F1 races of all time.

Run in extreme wet weather conditions, the action kicked off on Lap 1 when Coulthard aquaplaned his McLaren into the trackside wall after the first corner. This triggered a massive 13-car pileup that unsurprisingly saw the red flag come out in order to allow the damaged cars to be recovered and the track to be cleared.

Once the race resumed an hour later, Damon Hill took the lead in his Jordan – the first time he had led a Grand Prix since the 1997 Hungarian GP. While championship leader Mika Hakkinen lost control of his car and spun, colliding with Johnny Herbert and retiring from the race, his rival Schumacher looked set for another win at Spa after taking the lead.

Schumacher had built up a lead of over 40 seconds, however that all changed as he prepared to lap Coulthard. The McLaren driver lifted off but he remained on the racing line. With visibility still poor due to the rain, Schumacher slammed into the back of the McLaren and lost his right-front wheel.

Both cars returned to the pit lane, the McLaren having lost its rear wing, with Schumacher fuming over the incident. The German went to the McLaren pit garage and accused Coulthard of trying to kill him. Although Schumacher protested to the stewards about the incident, nothing came of it as Coulthard later rejoined the race after his wing was replaced.

Back on track, only six cars remained with Hill collecting the 22nd and final victory of his career, along with Jordan's first ever win, with teammate Ralf Schumacher and Benetton's Jean Alesi rounding out the podium.

Jack Brabham won the 1960 Belgian GP, however the race is remembered for all the wrong reasons following the deaths of Chris Bristow and Alan Stacey.

Things got off to a rocky start during practice when Stirling Moss and Mike Taylor suffered injuries in separate accidents. Moss suffered two broken legs that kept out of action for several months, missing the 1960 24 Hours of Le Mans as well. As for Taylor, the injuries he suffered after crashing at Stavelot ended his racing career.

Things went from bad to worse in the race as Bristow ran off line at Malmedy and crashed into a four-foot high embankment, killing the Cooper driver. Just five laps later, Stacey was hit in the face by a bird at Masta, causing him to lose control of his Lotus and sending his car somersaulting into a field. The car caught on fire with Stacey trapped inside, killing him as well.

The 1960 Belgian GP is one of two occasions in which two driver fatalities have taken place at an F1 event, the other being the 1994 San Marino GP. However, the events at Spa are the only one where both have occurred during the race itself. 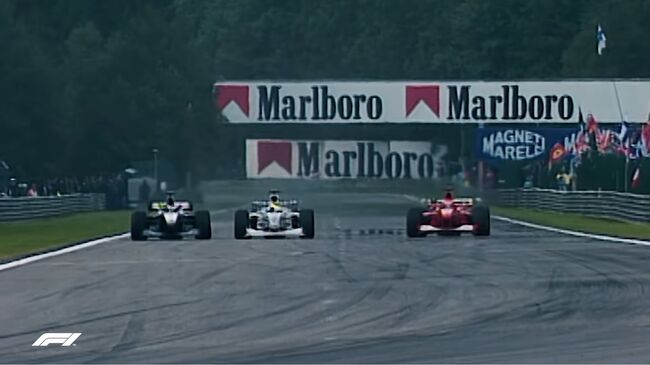 The 2000 Belgian GP began behind the Safety Car due to standing water on track, despite no rain being predicted for the race.

Pole-sitter Hakkinen maintained his lead once the Safety Car came in after Lap 1. The Finn built a 10-second lead over Trulli by Lap 5, while Schumacher moved into second after the Italian spun following a collision with Button.

Hakkinen led by just over four seconds at the beginning of Lap 13, before a spin at Stavelot handed Schumacher top spot. The two remained in those positions after all the scheduled pit-stops were completed on Lap 34, with the McLaren driver doing all that he could to find a way past the race leader.

The turning point came on Lap 41 as both drivers approached the slower BAR-Honda of Ricardo Zonta. The Brazilian went down the middle of the damp track, while Hakkinen moved to the right and Schumacher to the left. Hakkinen pulled off the three-wide pass in spectacular fashion and crossed the line for his fourth win of the season.

Hakkinen's breath-taking pass is still talked about to this day.

The Williams' of Nigel Mansell and Nelson Piquet started the 1987 Belgian GP on the front row, with the Briton putting in a time that was nearly 1.5 seconds faster than his teammate.

Two starts were needed as things got dicey when the lights turned green the first time around. While Mansell led from Ayrton Senna, Piquet and Michele Alboreto, things weren't quite as smooth further back on the grid. Ligier's Rene Arnoux and Brabham's Andrea de Cesaris tangled, while Thierry Boutsen collided with Gerhard Berger's spinning Ferrari.

Tyrrell's Philippe Streiff crashed heavily at Eau Rouge before being hit by teammate Jonathan Palmer. While both drivers were able to walk away unharmed, only Streiff was able to restart the race as he got the spare car by virtue of qualifying 23rd compared to Palmer's 24th.

The big talking point came at the second start with Senna leading from Mansell this time. The Briton tired to overtake the Brazilian, however the two tangled. As a result Senna was forced to retire his Lotus, and while Mansell rejoined the race at the back, the damage sustained forced him to retire on Lap 17.

Mansell made it clear he wasn't pleased with the incident, visiting the Lotus garage. The two exchanged harsh words and punches were even thrown, though it did little to help their chances on track that day.

As for the race itself, Alain Prost took the lead after Alboreto's wheel bearing broke and Piquet retired with a broken turbo pipe. Pit-stops did little to change the running order, with Prost taking his 27th win to equal Jackie Stewart's record. Teammate Stefan Johansson made it a one-two finish for McLaren, while de Cesaris finished third.