Valtteri Bottas was the fastest driver on the track during the first practice session for the Portuguese Grand Prix, just ahead of the two Red Bull cars, while Sir Lewis Hamilton was back in fifth place. 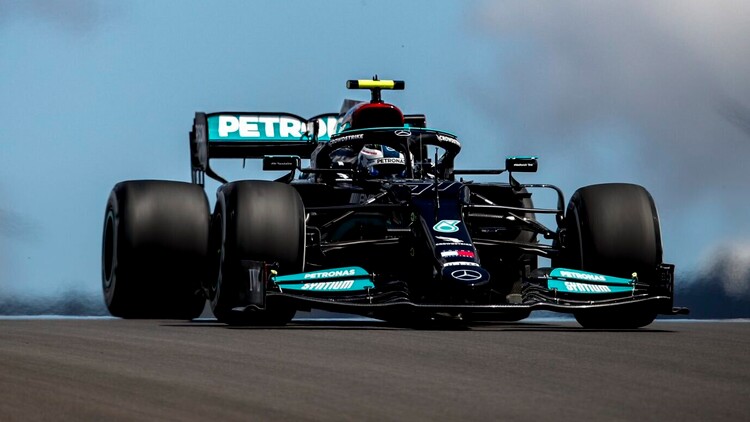 Mercedes' Valtteri Bottas put in the fastest lap time of the first practice session at Portimao ahead of the Portuguese Grand Prix, setting a time of 1.19.648, two hundredths ahead of Max Verstappen in the Red Bull in second place.

Verstappen dealt with vibrations in the car towards the end of the session after the front left tyre flat spotted, but was able to come into the pits and get it fixed and get back on track for the last five minutes of the practice. The Dutchman's teammate Sergio Perez was two tenths back in third.

Sir Lewis Hamilton struggled in his first run of the session, with his best lap only good enough for 11th overall, and subsequently came back into the pits to make some tweaks to the car's setup, but the changes were not enough to get the world champion to the top of the timing charts as he finished in fifth, three tenths off the lead.

Charles Leclerc in the Ferrari was the best of the rest behind Bottas and the Red Bull cars, his time of 1.19.884 putting him in fourth, while his teammate Carlos Sainz was 1.032 seconds off the pace in ninth.

George Russell in the Williams was a surprise inclusion in the top ten, his time of 1.20.529 good enough for seventh overall, behind the Alpha Tauri of Pierre Gasly was just ahead in sixth.

Lando Norris, who put his McLaren on the podium last time out at Imola, was back in eighth place 0.987 seconds slower than Bottas, while his teammate Daniel Ricciardo was a further four tenths off in 12th.

The Aston Martins both finished the session out of the top ten, as Lance Stroll put in a time of 1.20.894 in 11th place, while Sebastian Vettel was six tenths slower than his teammate in 16th.

Drivers across the grid struggled to get temperature into their tyres on the relatively cold track, with most opting to run the hard compounds early in the session before they began to switch onto the soft and medium tyres later.

Red Bull started the session slightly later than the rest of the teams as Sergio Perez's car required changes to sensors on the back end after modifications were made to the cars floor and Verstappen opted to stay in the garage during the initial stages.

Ferrari academy driver Callum Illot made his Formula 1 debut in the session, driving for Alfa Romeo in place of Antonio Giovinazzi, putting in a best lap time 2.158 seconds off the pacesetter in 17th place.