Alonso: Hamilton and I both weren't ready for 2007 fight

Fernando Alonso has been reflecting on his year spent as the teammate of Lewis Hamilton at McLaren in 2007, a season where he thinks they both could have "done better". 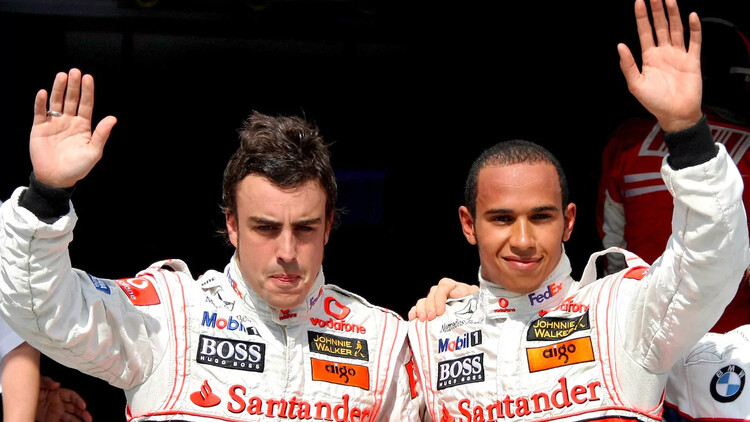 Fernando Alonso believes that neither he nor Lewis Hamilton were "ready" for their battle as teammates in 2007.

The pair raced alongside each other at McLaren for just one season, and each began the year in very different circumstances. Hamilton was making his debut in Formula 1, whilst Alonso arrived at the team off the back of winning back-to-back World Championships with Renault.

It was a famously tumultous year for the Woking-based squad, and Alonso left at the end of it to rejoin Renault in 2008. However, the car was competitive, and both drivers challenged for the title, though each lost out by one point to Kimi Raikkonen.

Reflecting on his past battles with rivals, Alonso believes that both he and Hamilton could have "done better" in 2007 if the situation had been different for each of them.

"I think with Lewis, we didn't have the competition that I was looking for," Alonso told the Beyond The Grid podcast.

"It's true that in 2007 we shared the team, and that's for the general people [deemed to be] the biggest fight you could have. But in 2007 I think we were both not ready.

"Understandably, he was not maybe ready for the fight because he was a rookie and coming into Formula 1, and I was not performing at my best. [I was] not really integrated with the team.

"For sure, we had all the fights together and all the stress together to fight for the championship, and we were not well managed at that time.

"OK, we finished with the same points in the championship, which you could see as a very big fight and [an] even fight, but I think we both could have done better."

Hamilton "pushes you to the limit"

There were still some battles between Alonso and Hamilton after 2007, but these were rarely as close given the differences in performance between the cars they were driving at various points over the years.

However, based on the fights they have had, Alonso thinks that racing against Hamilton requires a driver to perform at their very best.

"In the following years [after 2007], I had a better package in [the] Ferrari, than him when he was in [the] McLaren," the Spaniard explained. "So we didn't fight [as closely].

"[Then] when he switched to Mercedes, he had a better package and we never had the opportunity again to fight together.

"So that's a missing point in my career. But obviously, he is a legend of the sport, and he, like Michael [Schumacher], pushes you to the limit, because if you want to beat Lewis, you need to perform at your best."