Winners and losers from the F1 United States Grand Prix

Sunday's United States Grand Prix proved to be a nailbiter, with a tremendous strategy battle won by Red Bull and Max Verstappen. Who were the winners and losers from the race at the Circuit of the Americas? 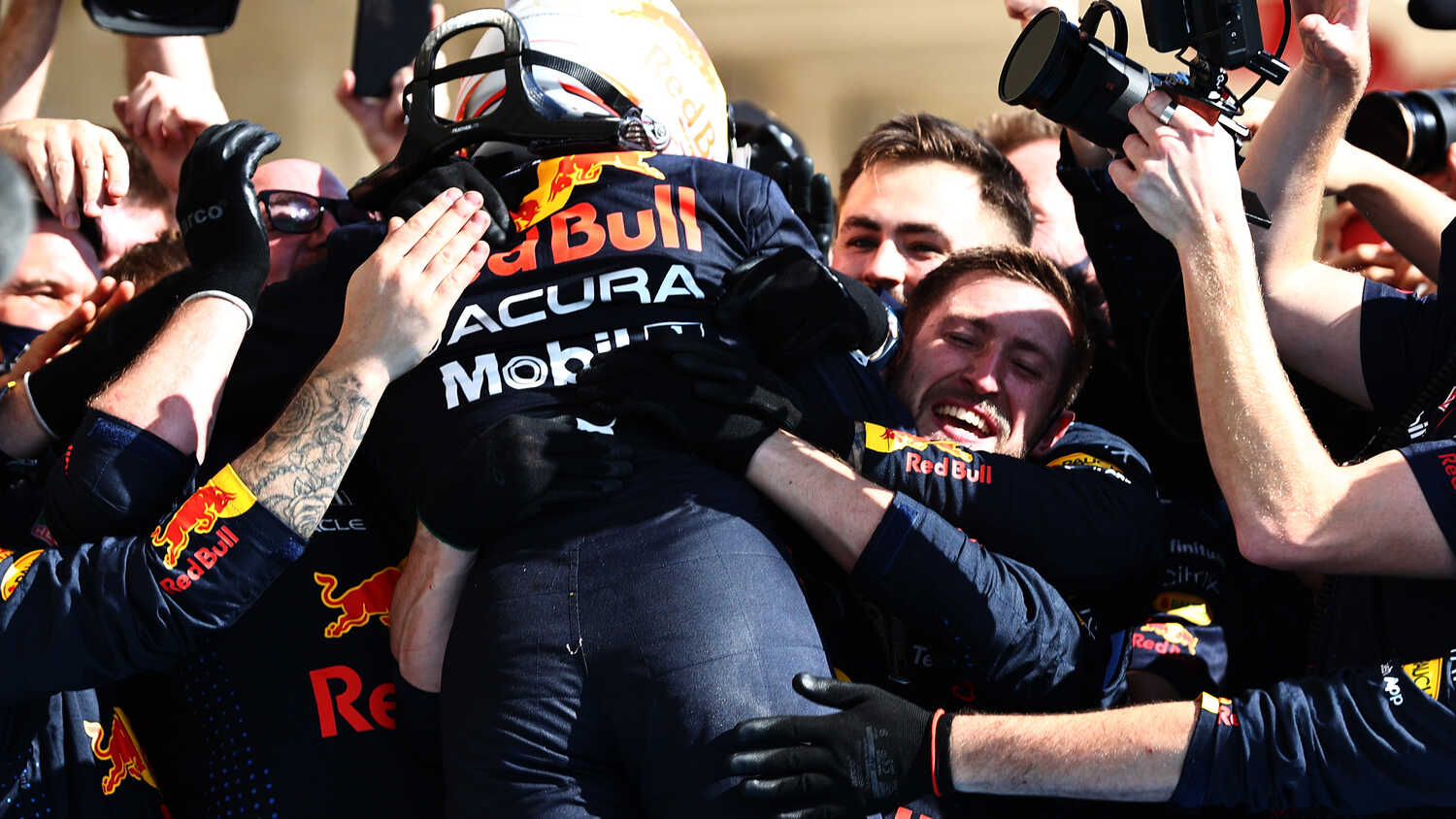 Red Bull's Max Verstappen extended his lead in the Drivers' Championship in the United States, thanks to a stellar performance that saw him soak up pressure from Mercedes rival Lewis Hamilton and claim victory.

If there were ever any doubts that Max Verstappen isn't a deserving, World Champion-level driver, his performance at the Circuit of the Americas surely proved that it's a case of when, not if.

With Red Bull struggling more on the Hard tyres relative to Mercedes, Verstappen knew from quite early in the race that the pressure would only escalate as the laps ticked by. It was crucial, then, that he nailed every braking point, massaged every traction zone, and utilised every little bit of life that his ageing Hard tyres had as he faced an onslaught from the pursuing Lewis Hamilton.

There's not many who could face up against (arguably, on that compound) a faster Mercedes in the hands of Hamilton, especially given that Lewis was on eight-lap fresher tyres. But face up to it Max did, and he kept his cool to cross the line just a second clear of his rival.

The decisive moment was probably his middle sector on the penultimate lap, when Verstappen eked out an extra half a second on Hamilton – crucial, given that he would lose it moments later when he encountered Mick Schumacher's Haas in a less than opportune place.

Verstappen was near perfect in Texas, with his only slight stumble being at the race start. Not for the first time this season (Monza, anyone?), he didn't make the best of getaways. While his initial reaction time was fine, Hamilton's was marginally faster, but it was Verstappen's approach to Turn 1 that almost cost him another place. Had it been any other car other than Sergio Perez alongside through Turn 2, Max would have probably slipped to third and, with that, defeat. 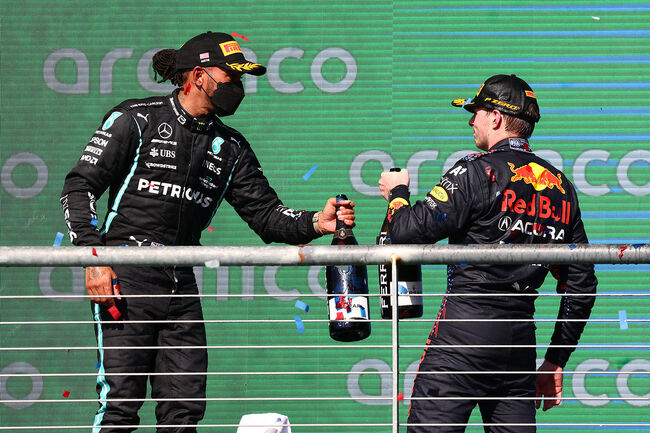 Like Verstappen, Hamilton was near perfect in Austin. He threw absolutely everything, including the kitchen sink, straight back at Red Bull as the race slowly came more towards the W12.

With the Mercedes not quite as happy as the Red Bull on the softer tyre compounds, the Hard tyre seemed to work far better as Hamilton chomped at the bit to close down Verstappen after Red Bull's aggressive undercut.

Hamilton was praised by Mercedes afterwards for keeping his head and slowly bringing his tyres up to temperature, displaying the patience that has won him umpteen championships. With his own tyres starting to fade towards the end, Hamilton was ultimately unable to put in a proper challenge against Verstappen, but that takes nothing away from the level of performance he put in.

His start and subsequent pass on Verstappen would, on most days, have been enough to clinch the win.

Hamilton's body language after the race, for the first time, suggested that he is finally realising that this championship might be slipping away from him as the points gap grows to 12 points. But, if Lewis can turn this around, it will arguably be his finest championship victory yet, given the might of Red Bull and Verstappen. 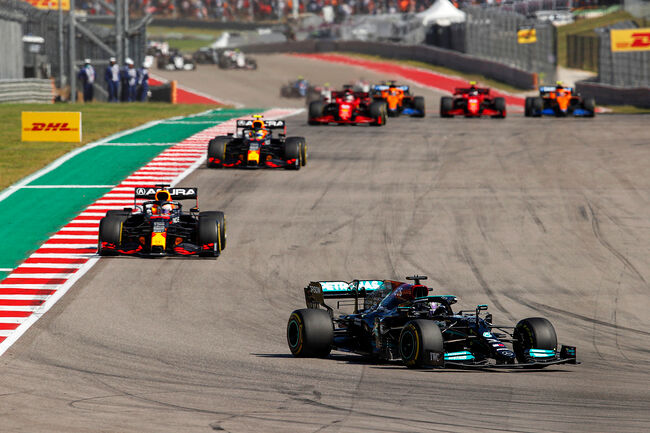 After showing signs of a season revival in Turkey, Perez picked back up where he left off in Austin.

Obviously popular with the Texas crowd, and with support in the garage from his family, Perez delivered a blinder of a weekend to help Red Bull close down Mercedes in the Constructors' Championship.

Genuinely in contention for the pole position, Perez was only bested by Hamilton and Verstappen's final efforts. Having been battling illness all weekend, Perez's race was already a physical challenge even before his drinks bottle failed.

Driving in 35 degrees Celcius air temperature with no water, it would have been easy for Perez to make a mistake under such physical and mental exertion. But the Mexican kept his head, despite complaining of his sapping strength and blurring vision as he neared the end of the race. Knowing how important his result would be, and feeling the expectation of his supporters, Perez dug deep to bring the car home and claim another podium.

Perez is finding form exactly when Red Bull needed him to, and this run he's finally stringing together could continue next time out at his home race in Mexico. 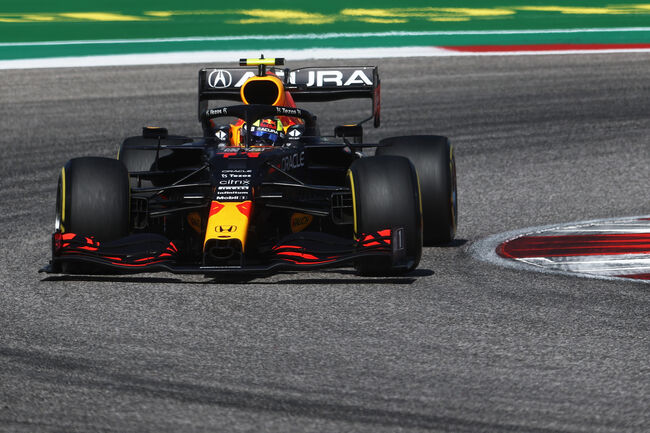 After a tremendous Turkish Grand Prix, it was more of the same from Charles Leclerc in Texas as he broke free of the midfield Ferrari/McLaren battle to finish 24 seconds up the road from Daniel Ricciardo and, once again, best of the rest behind the Red Bulls and Mercedes.

It's testimony to the quality of his race that he described it as "boring", given that he was able to slot into the no-man's land between the pace-setters and the rest. Since Ferrari's power unit updates have been introduced, Leclerc looks to have engaged a higher gear and, right now, he only needs a little bit more pace from his car to really start giving the leaders a headache.

Starting from the very back after an engine change grid penalty, at a track where Aston Martin didn't look particularly fast anyway, Vettel rescued a points finish.

Running a long first and second stint on Medium tyres gave him a quick Hard-tyre run to the chequered flag, and included a particularly nice overtaking move around the outside of George Russell through Turn 18.

With a few more laps, Yuki Tsunoda might have been his next victim but, ultimately, 10th place was a good result for the four-time World Champion. 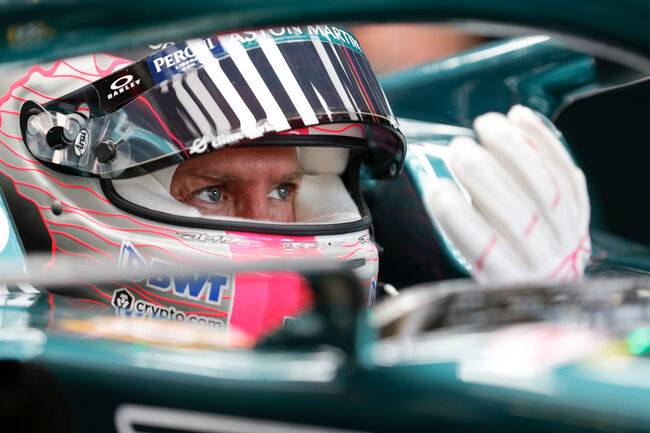 It's not so much that Mercedes did anything wrong over the United States GP weekend, but more a case that they were simply bested by Red Bull throughout.

Not quite able to match the single-lap pace of Red Bull on the softer compound tyres, Mercedes briefly seized the high ground thanks to Hamilton's tremendous start. But given they had taken track position, they were backed into a corner as Red Bull went aggressive with the undercut at the first stops.

There wasn't a whole lot Mercedes could have done differently from there in terms of strategy but, crucially, Valtteri Bottas being out of position meant that Red Bull could employ a two-pronged attack against Hamilton.

The power unit issues have, thankfully, not had any effect on the championship in as dramatic a fashion as, say, Malaysia 2016 did for Hamilton. But it's turning into 'death by a thousand cuts', as Mercedes didn't have any tactical response to Red Bull's strategy due to Bottas' Internal Combustion Engine needing changing, yet again.

For now, it's only been a real hindrance on Bottas' side of the garage. But with five races to go, can Hamilton really make it to the end of the season without any issues? 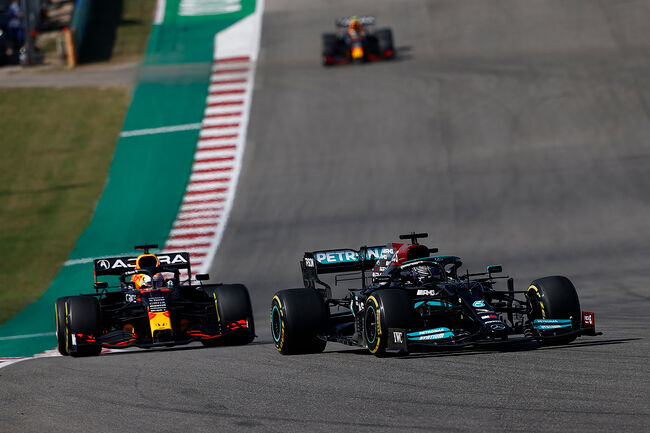 Although the engine issue wasn't his fault, Bottas had a typically limp race from ninth on the grid.

While COTA is a tough track to follow other cars at, which is something the Mercedes isn't particularly good at at the best of times, Bottas struggled to clear the AlphaTauris in the early stages of the race. He recovered to sixth place, stealing the position away from Carlos Sainz on the penultimate lap after running long in the first two stints.

Bottas has proven on multiple occasions that he lacks the same ability as Hamilton to cut through the field from a lower starting position, and Mercedes need to ensure he starts from a higher position if they want to fend off Red Bull for the Constructors' title. 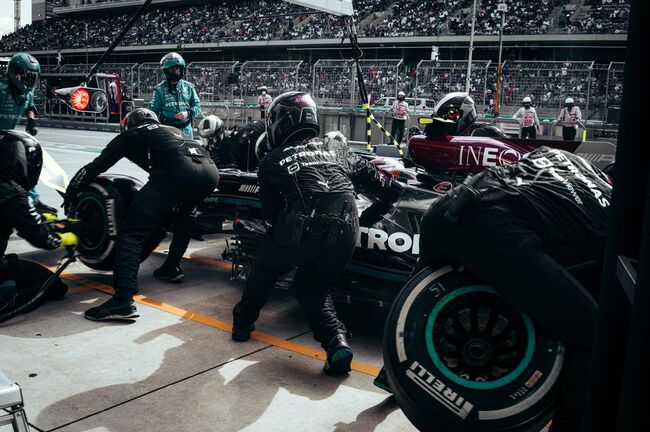 It was a double retirement for Alpine in the United States, with Alonso retiring late on after his rear wing cracked due to the stresses inflicted by the bumpy nature of the circuit. Esteban Ocon also retired after he picked up damage early on due to contact with an Alfa Romeo, before being withdrawn due to a suspected suspension issue on the rear of his car.

Alonso had a pretty poor race by his own standards as well, and seems to have taken on a new role as the cranky old guy complaining about the rules. His sarcastic "Yessss!" as he overtook Antonio Giovinazzi while miles off the track after missing his braking point was cringey, as was the radio call from Alan Permane that seemed far more disrepectful towards Michael Masi than the FIA Race Director should command.

Alpine and Alonso's position that the stewards were "inconsistent" in applying the rules is a valid one, but perhaps should have focused more on the chaos of the first lap and the passing off-track then, rather than Alonso pushing Raikkonen off the track and then getting stroppy when the Finn kept the boot in.

It's not a particularly endearing crusade but, if anyone is going to do it, the wily Alonso is probably the right man to take it on. 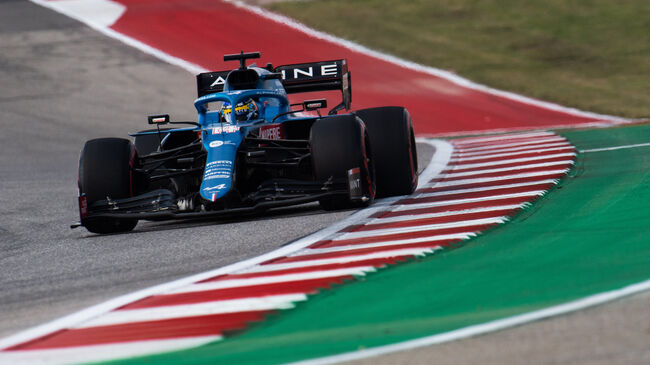