VeeKay ruled out of IndyCar for Road America after cycling accident

Ed Carpenter Racing will run Oliver Askew for this weekend's IndyCar race at Road America, with Rinus VeeKay sidelined through injury after a cycling accident 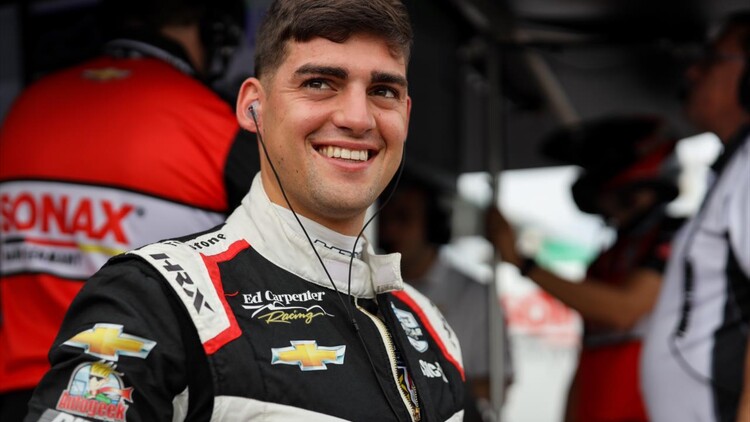 Rinus VeeKay will not take part in this weekend's IndyCar race at Road America, after undergoing successful outpatient surgery in the United States following a cycling accident.

VeeKay was injured on a cycling trail while training, fracturing his left clavicle. Now in the care of IndyCar's medical staff, he is not medically cleared to take part in this weekend's race.

“What happened was very unfortunate and definitely not the greatest timing! The surgery went well, I am not in any pain,” VeeKay told media.

With the Dutch driver joining compatriot Max Verstappen on the world stage by becoming a recent race winner in IndyCar after winning the Indy Grand Prix in May, VeeKay is aiming to return for the Mid-Ohio round.

“I definitely wanted to be out there fighting for my place in the championship and driving the car," he said.

"I will give it all I have and be ready for Mid-Ohio! I am very thankful for everyone at ECR that helped me and stayed up very late to get everything for the surgery arranged. I would also like to say a big thank you to everyone at OrthoIndy who got me all fixed up!”

VeeKay's seat at ECR will be taken by Oliver Askew, who also stood in for the second Belle Isle race last weekend as replacement for the injured Felix Rosenqvist at Arrow McLaren.

“First off, I hope Rinus is doing well and that he has a quick recovery!” said Askew.

“I’m thankful that Ed and his ECR team trust me to take over the No. 21 Chevrolet this weekend. They have a strong programme and I look forward to helping them in every way possible at Road America.”