Norris details why Ricciardo relationship differs to that with Sainz

Lando Norris had a good friendship with former teammate Carlos Sainz, but he admits that his relationship with new McLaren driver Daniel Ricciardo is slightly different for various reasons. 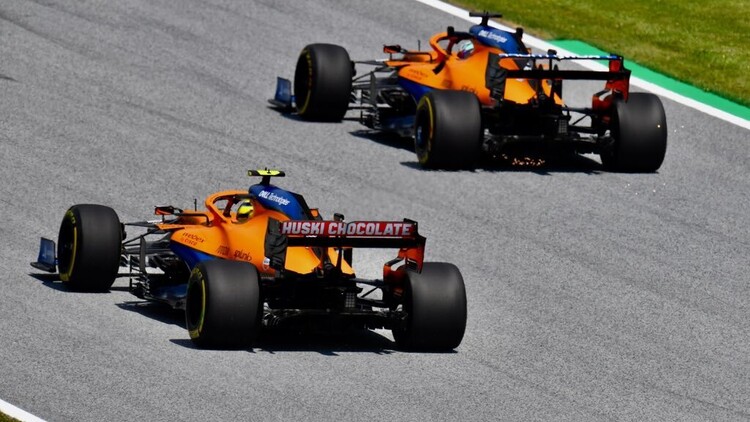 Lando Norris has explained why his relationship with fellow McLaren driver Daniel Ricciardo differs from that he had with his former teammate Carlos Sainz.

With both being known for their sense of humour, there were expectations from some that Norris and Ricciardo would be good friends off track. But so far their relationship has been more professional than personal, and Norris thinks this is partly down to their interests away from racing being very different.

"We still get on well, we still have good laughs and we're still good mates and everything," Norris told RacingNews365.com and other select media.

"But one simple thing is our interests away from the circuit are very different. He's more into his making wines and in clothing and things, and I'm more into golf and eSports and those kinds of things which Carlos was a little bit more into, so we'd play golf every now and then and we'd play on the sim and race each other and do things like that.

"So one simple thing of becoming better mates is I guess spending time together and enjoying yourselves and stuff, and playing golf was one of those things which made a lot of things better."

Norris admits that there are other reasons for the differences in the relationship too, such as the fact that he is focusing more on his own performance.

"I'm probably focusing a lot more on myself than I have done," the Briton said. "Spending more time focusing on the important things, the things I really need to focus on, which is my driving and having a performance like I have this year.

"And a bit of that is focusing on things you really need to focus on in order to do a better job, and spending time with my engineers, and less time chatting and having fun and things like that.

"But I'm not taking anything away from my enjoyment of Formula 1, I still love it and do everything I want to do, but just a bigger shift towards the focus on the work ethic side. So [that] definitely has an effect, but I can't tell you how much."