Mercedes explain why Bottas struggled so much to overtake

With Valtteri Bottas lucky to salvage a points finish after struggling for most of the Russian Grand Prix, Mercedes have pointed to understeer as being the culprit for his issues. 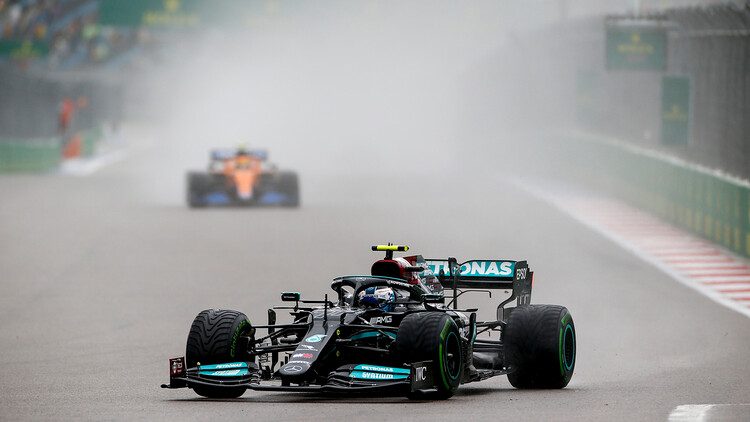 Mercedes' Valtteri Bottas was fortunate to come home in the points at the Sochi Autodrom, capitalising on a perfectly timed call from the team to swap from the dry to the Intermediate tyres just as the rain began to fall late in the race.

Until that point, Bottas had been running in 14th, well outside the points-paying positions, after a laborious race from a 16th-place grid slot.

Having been unable to provide any particular resistance to the recovering Max Verstappen early on, Bottas couldn't work his way through the field as he was simply unable to get close enough to rival cars entering the start of the pit straight.

Given that teammate Lewis Hamilton had similar issues further towards the front, Mercedes' Trackside Engineering Director, Andrew Shovlin, highlighted understeer through the last sector as the biggest factor in Bottas' inability to make up ground.

"Principally, [with] the cooler conditions, the front tyres were having a tough time," Shovlin told select members of the media, including RacingNews365.com, after the race.

"We were understeering a bit, so whereas on Friday the rears were really the axle suffering the most, here it was the front. And when you can't follow in those last four corners, then you can't get close enough to overtake.

"It was really down down to car balance, but I think the cooler conditions were actually making it more difficult rather than easier."

Mercedes boss Toto Wolff defended Bottas' poor race, saying that it is imperative the team give him the equipment to be able to fight.

Pointing to the example of Monza, where the Finn sliced through the field from the back just two weeks previously, Wolff stated that the car issues were visible on both sides of the garage.

"I think we need to provide Valtteri with a car and a power unit that can make him overtake," he said.

"It's not lacking the ability because Monza was spectacular. It's just here, for whatever reason, you have seen with Lewis at the beginning, that our car was struggling with understeer.

"If you struggle with understeer, you're not getting close enough. Lewis couldn't overtake the guys in front of him and the same happened to Valtteri.

"I think we just need to now really understand why the car lacked competitiveness in traffic and felt good in free air."