Hamilton stands up for Bottas after own post-race criticism

Lewis Hamilton has backed teammate Valtteri Bottas following his own seemingly critical comments about the Finn's driving on the first lap of the Mexican Grand Prix. 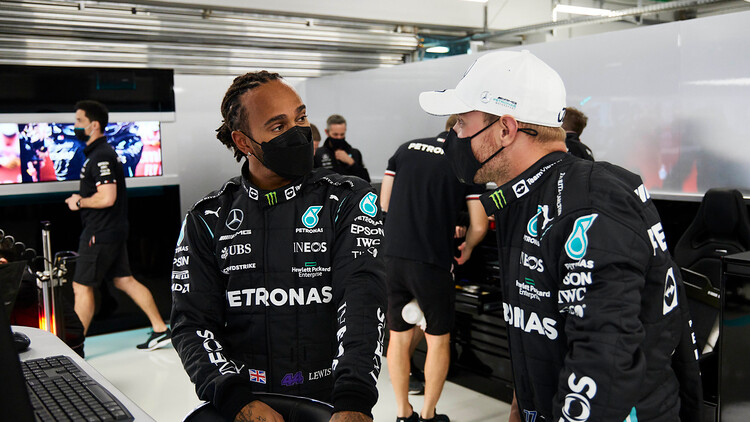 Lewis Hamilton has posted a message of support to Valtteri Bottas, after previously appearing to question his teammate's lack of defence against Max Verstappen on the opening lap of the Mexican Grand Prix.

Mercedes locked out the front row of the grid for Sunday's race but Verstappen jumped from third to first on the long run down to Turn 1, taking up a gap vacated by Bottas and swooping around the outside of the Silver Arrows.

Hamilton was seemingly critical of Bottas in the post-race press conference, commenting that the Finn "left the door open" for Verstappen, who went on to claim a comfortable win and extend his title lead.

"I had envisaged it differently, naturally, in the sense that Valtteri maybe would get a better start, and I would have tried to get into his tow," Hamilton told media, including RacingNews365.com, on Sunday afternoon.

"But obviously I was alongside him, which was good. And then I was just covering my side of the track, trying to make sure no one could come up the inside, so I was trying to keep whichever Red Bull I could see in my mirror behind.

"I thought Valtteri would be doing the same, but obviously he left the door open for Max. And Max was on the racing line, so he did a mega job braking into Turn 1, and because I'm on the inside in the dirt, there was no hope for me."

"We win and we lose as a team"

However, shortly after clarifying a separate comment about Sergio Perez, Hamilton posted a message on social media directed at Bottas.

"We all have bad days. We live and we learn," Hamilton posted on Instagram.

"Yesterday I said that [Bottas] left the door open and naturally people will jump to criticise.

"We are a team and we win and we lose as a team. There is not one single person responsible for winning or losing, we do it together good or bad.

"You may be able to beat us but you can't break us! Onto the next one Valtteri, let's keep pushing bro."

Hamilton now trails Verstappen by 19 points in the standings, with four races remaining.