Remember when Max Verstappen had to wait three hours to be awarded his race victory in 2019? Well, just imagine how agonizing it would have been if he'd had to wait five days - just as Giancarlo Fisichella did back in 2003. 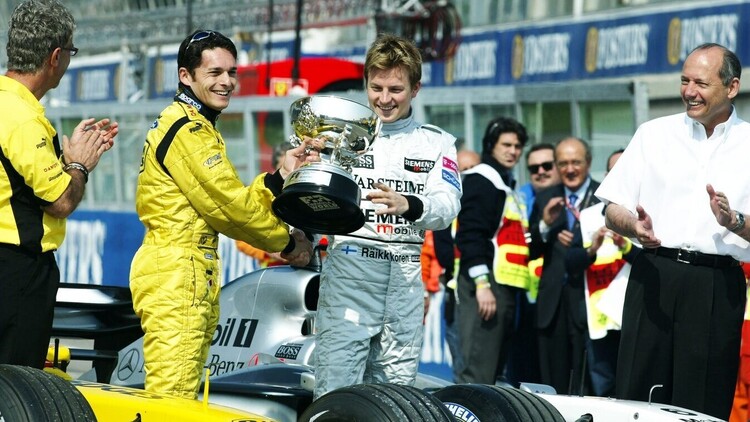 The 2003 Brazilian Grand Prix was one of the most chaotic and action-packed that you are likely to come across.

As all great Interlagos races tend to be, it was a washout, creating the perfect conditions for an all-time classic - one that was prematurely ended by a huge shunt for future world champion Fernando Alonso.

Towards the end of the Grand Prix, crashes for Mark Webber and Alonso (the latter hit debit from Webber's Jaguar) caused the red flags to be waved, and the race to be halted prematurely. It left a big question unanswered: just who had won the race?

The rules stipulated that in that situation the result must return to the positions of each driver as they were two laps before the red flags were waved. For a moment, the screens showed that Fisichella (as leader) had started the 56th lap, but later that screen showed that he had only completed 55 laps. Two laps before the 55th lap, Kimi Raikkonen was still in the lead, who was therefore awarded the victory.

Jordan duly protested and race director Charlie Whiting was not certain on his journey home from the track whether they had picked the right winner. The Formula 1 timekeeper, TAG Heuer, was summoned to hand over all the data from the race to the FIA in Paris. That information showed, five days after the Grand Prix, that Giancarlo Fisichella had indeed won the race.

It was the Italian's first F1 victory, though he could only 'celebrate' the victory on the Imola circuit weeks later. During an unofficial ceremony, McLaren and Raikkonen had to hand over the trophy to Fisichella and Jordan (see photo), who would experience their last ever victory as a constructor.

Only during the Sakhir Grand Prix in 2020 was a race again won by the team that started life as Jordan (although by this stage they were of course called Racing Point).