Button reveals how Hamilton and Alonso compared as teammates 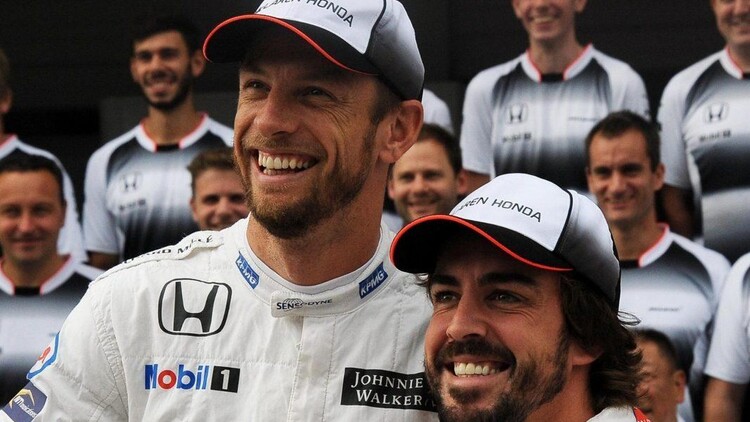 Jenson Button has explained how Lewis Hamilton and Fernando Alonso compared as teammates, revealing who he felt was faster over one lap and who was the more "complete" package as a driver.

Button partnered Hamilton at McLaren between 2010 and 2012. Despite being comprehensively beaten in their qualifying head-to-head, he managed to outscore the younger Briton over the course of their three seasons together.

In 2015 and 2016, while still racing for McLaren, Button was joined by Alonso. Given the team's struggles with returning engine partner Honda, the pair were often fighting themselves at the back of the field.

In an interview for Nico Rosberg's YouTube channel, Button was asked to rate Hamilton and Alonso in terms of outright speed and as an overall package, given his first-hand experiences of working with them.

Regarding who was the faster driver over one lap, Button stated: "I think Lewis is."

Pushed on who he would rate as the more "complete" driver, he said: "I can only compare them when I had them as teammates, really. I can't compare them now. But the most complete driver was Fernando. He would find every way to be quicker than you.

"Lewis, for me, was a very straightforward teammate. He was really quick. In testing he could be not really on the pace, three- or four-tenths off even, and I don't think he was doing it on purpose. Then he'd get to qualifying and he'd be on it. He would always find the lap time in qualifying.

"Fernando would play games a lot more. Which, in a way… I was at a point in my career that I was up for games. We weren't fighting against anyone else, we [McLaren] were so slow that we were fighting against each other.

"We played a lot of games, some of them that I don't really want to mention too much. Most of the time it was more just holding back things, holding back pace, holding back information about setups and what have you.

"We understood each other and we definitely respected each other, and we knew that when we did things the other guy could take it. I respected Fernando for that."

Button added that Alonso's games stretched to occasionally reporting an issue with his car when he was slower during races.

"We weren't scoring points, so to be fair, he's kind of saving the car for the next race. He was like, 'There's a problem, there's a problem!', and they [the team] would be like, 'No, Fernando, there's no problem, keep driving!'

"It was a funny time. But I really enjoyed my time with Fernando. He's an extreme talent in many ways. For him to go off and do Le Mans, to race Dakar, to do Daytona… fantastic, fair play to him. [They are] very, very different categories, and he was very strong in whatever he drove."

Summing up, Button said: "Having both of them as teammates was very special, because you just knew that you were up against the best. And when you did beat them, it meant so much more."