The Mercedes driver admits he did not expect Lando Norris to be so quick during the race at the Red Bull Ring, on his way to second place, 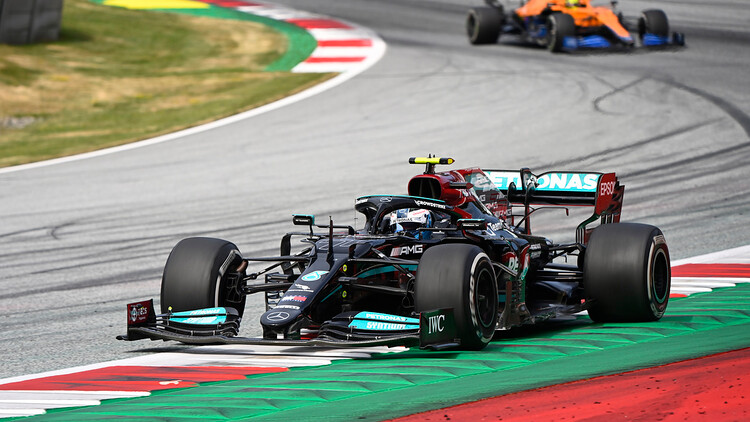 McLaren's race pace at the Austrian Grand Prix was a surprise to Valtteri Bottas and he admits that it was not easy to keep Lando Norris at bay in the closing stages of the race.

Bottas jumped Norris during the first pit stop as the McLaren driver served a five-second time penalty. But, he was unable to pull away from Norris as the pair finished just two seconds apart at the finish line.

"I think McLaren made a good step," Norris told RacingNews365.com and other select members of the press. "They were definitely putting some pressure to us in the end and it was quite surprising considering there was quite a few tenths of pace difference last week.

"So, I don’t know, maybe Lando can tell me later what they found from the week before and then we can improve. We really had to fight to get the place.

Mercedes trail Red Bull by 44 points in the Constructors' Championship and have not won a race since the Spanish GP at the start of May. Bottas remains optimistic about Mercedes' chances and revealed that upgrades will be brought to the next race in Silverstone.

"It’s a challenge but we’ve been racing on the same track for two weeks and it is clear Red Bull is faster her," said Bottas. "But it could be different on some other tracks.

"I think this track suits their car pretty well, but they’re not slow anywhere else. Silverstone is completely different.

"There are a lot more high-speed corners and so, we’ll see. We have something planned in terms of new bits for Silverstone.

"I think after that it will be quiet in terms of new parts but we’ll keep pushing as hard as we can but we know it’s going to be tough."